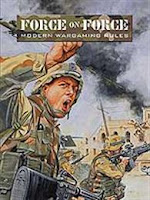 Our final tabletop miniatures game of the week was a chance to get the new edition of Force on Force to the table along with my Mongrel Soviets and Afghans.  I decided to try a asymmetric engagement as I thought this suited the forces better so we still need to try a kinetic game in order to properly try the rules out.

The scenario was adapted from one kindly published by [insert] (the adaptations were largely due to the fact I didn't have the vehicles).  Lenin, as Soviet commander, was required to identify, isolate and neutralise the Mujahideen forces in the compounds.

The basic concepts behind the rules are fairly straight forward; however, the way they have decided to cover all the aspects in each section of the rule book makes them a little daunting at first.  We weren't phased by the reaction based approach as we are both very familiar with the Two Hour Wargames rules which use a similar approach.

The scenario did not start well for the Soviets.  Their first fire team advanced cautiously from behind a field of crops into sight of a group of Mujahideen concealed within one of the compounds.  This resulted in my group opening fire and causing enough casualties to effectively eliminate the Soviet fire team.  The other half of the Soviet squad then advanced to try and extract the casualties and a similar thing happened.  This rather gave us pause as, if this was going to be repeated each time the Soviets came into sight there was no way for them to get a team onto overwatch and hence be able to make any headway at all.  In fact I had rolled rather well for all the tests and firing rolls on both occasions (which happens some times despite my reputation!) so we decided to reset the game and try it again. 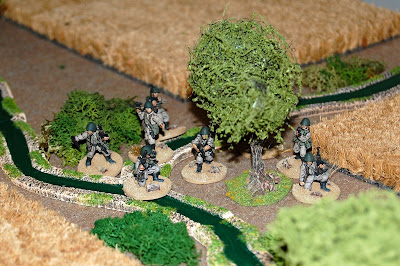 The second time I rolled somewhat more normal dice which gave the Soviets the chance to fire first and get a team into position.  This completely changed the situation and we both breathed a sigh of relief that it was simple chance and not any failure of the rules themselves (although it is something to bear in mind with small groups vs large ones when designing scenarios!).

With the Soviet left flank engaged they also began to advance on the right. 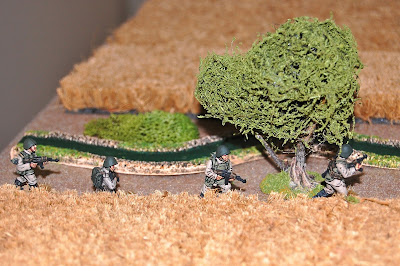 When they came into sight of the main compound another fire fight broke out, with the Soviets getting the drop on the Afghans again.

With things going well for the Soviets some Afghan reinforcements arrived.  This gave the Soviets pause but didn't prevent them from rushing and taking the first compound on the left flank.  The Afghans now concentrated in the larger central compound.  The Soviets brought up some reinforcements for an assault. 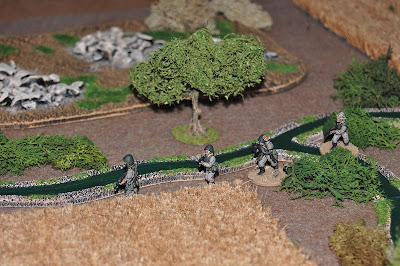 The Soviet launched their attack and quickly secured a foothold in the buildings on the edge of the compound.  A firefight broke out between the Afghans reinforcements and the Soviet ones but the Soviets quickly got the upper hand.

Even with more reinforcements arriving directly in the compound, the Soviets, now in position, make quick work of them and secured the entire compound.

The game was a lot of fun and so we will be giving the rules some outings in order to test the other aspects of them, particularly the kinetic (regular vs regular) engagements.
Posted by Whisperin Al at 4:08 pm