Our next game was another outing for Nuts!  - this time in the pacific using the War Against Japan supplement.  This time out we decided to take a US squad each and have the game run the Japanese.

The terrain was set up using the random generation tables in the supplement and our objective was simply to land on the beach and then clear it of the enemy.  We thought this might not be a simple as it sounds, particularly as the village just behind the beach counted as a potential contact!

Fortunately our landing went without a hitch.  My squad hit the beach and immediately advanced to clear the village.  It was all going well until one of my men tripped a booby trap in the doorway to one of the huts and blew himself up! 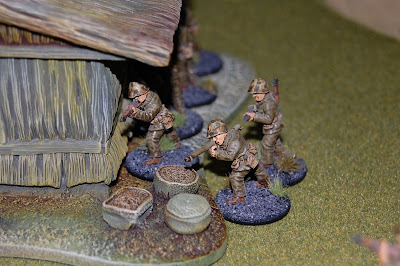 Lenin's squad was having a little more luck advancing through the jungle toward a gully; however, this was all about to change as when they spotted a couple of potential contacts they turned out to be almost a platoon of Japs between them!  Lenin came under some heavy fire and so fell back into the jungle. 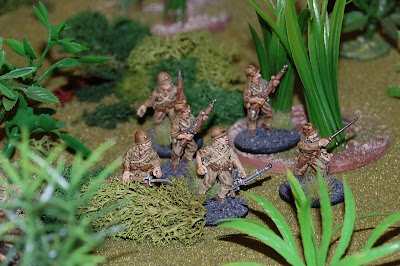 Having cleared the village I advanced on his flank and engaged one of the enemy squads to allow Lenin's squad to try an outflanking manoeuvre.  The firefight was favouring the japanese as they had a better LMG than my BARs so I pulled back to regroup.

I pushed one team forward to try to outflank the japanese and then launched a co-ordinated assault with grenades.  This effectively eliminated the japs and allowed me to advance on their position.  This is when it gets a little tricky as they have a habit of just playing dead or trying to take you with them when they go!  One of them took a shot at my men but fortunately wasn't successful.

Lenin tried a similar approach on the unit facing him and had similar initial success but when he advanced to investigate the japanese position he found one of them holding a grenade and lost most of his team.

Regrouping once again I decided to continue the advance.  Almost immediately we spotted a potential enemy force which, unfortunately, turned out to be a tank! 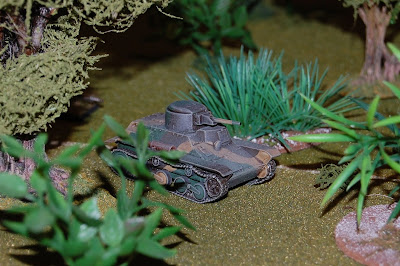 The tank spotted us and opened fire and a rather vicious engagement began.  My bazooka team were utterly useless and despite surviving the HE fire from the tank managed to miss it no less than three times!  Clearly frustrated by this ineptitude one of the NCOs decided to have a go himself and charged the tank armed only with grenades and a bad attitude.  It looked like a risky strategy but incredibly he managed to blow the tank up.

In the interim Lenin's men had come under fire from a sniper in a spider hole behind them and once dealt with we both had taken so many casualties that continuing with the mission was simply not an option and so we withdrew to the landing craft.
Posted by Whisperin Al at 7:13 pm