I've been thinking of adding to my board war-game collection so when I spotted a discounted copy of White Star Rising from Lock 'n Load Publishing at Infinity Games I decided to pick it up.

White Star Rising is a platoon level game set in WW2 based on the World At War moderns system.  The game comes with a 33 page rules and scenario book, one each of 2 different quick reference sheets, 200ish counters, four mounted (11 x 17") geomorphic maps and 4d6.

Here's what's in the box: 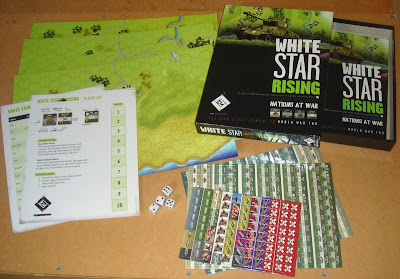 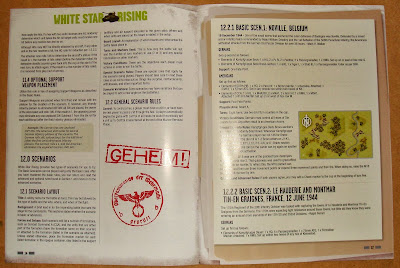 Units are activated using a chit pull system with two end of turn chits - which ensures that all units activate at least every other turn.  The counters have all the information you are likely to need printed on them and the rules seem relatively straightforward (they're about half of the booklet with the remainder being 16 scenarios).

If you want to know a little more here's a video review of the game from Marco Arnaudo:

Having already tried a game from Lenin's copy of World At War: Blood and Bridges I'm really looking forward to getting this to the table.
Posted by Whisperin Al at 3:01 pm