Longstreet is the latest set of rules from Sam Mustafa (the creator of Maurice, Lasalle, Grand Armée and Might & Reason) and are for the American Civil War.

As with Maurice the rules require the separate deck of cards although they are used in a slightly different way.  Frustratingly you actually need two sets of some of the cards and so despite buying the rules and card set I can't actually play without either buying another full set or downloading, printing and cutting out the cards from the website.

The rules themselves are 160 pages long and in colour but have been printed in a smaller format than Maurice. 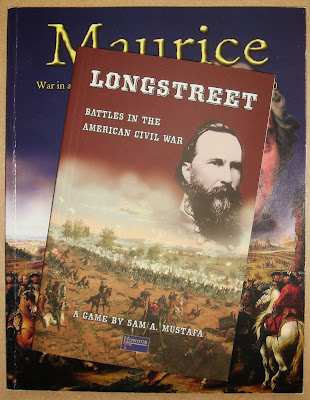 The rules use base width measurements and so rebasing isn't typically required and a single stand is intended to represent 60-80 men.

As with Maurice the cards play an key part in the game.  In this case they aren't used for their "span" but rather are discarded to invoke actions and then (as with Maurice) used to modify or interrupt them.  The deck has a number of other types of cards other than the action ones - some of which are only required for the advanced game.

At the beginning of a turn a player may choose to reshuffle (which has an inbuilt penalty as a number of cards are discarded if you do) and then, as with Maurice, there's an option for a fire phase followed by the player choosing from movement, combat or passing.

The advanced game introduces your character who can then be developed through the campaign system along with a variety of advanced rules (for heroes, sharpshooters, repeaters etc.).  There are sections on club games, scenario games and the grand campaign.

This is all rounded out with three appendices covering FAQs, a card manifest and the quick reference sheets.

I will be interested to see how the rules compare to Regimental Fire and Fury (which I will also be trying out).

Some sample pages from the rules and a "lite" version are available for download from the Honour website.
Posted by Whisperin Al at 12:00 pm