After some time in the planning we managed to arrange a reunion with a few gaming buddies. We all used to be part of the same club but over time have moved to different parts of the country and so only usually catch up individually or at Salute. We decided it would be nice to actually have a couple of games together; however the logistics proved a little challenging but this weekend we managed it.

Our first game was a 20mm WW2 battalion level assault on a French village. Our first task was to actually plan the logistics of the approach to the start line, the preliminary artillery and then the assault itself.

Initally we struggled to sort out travel orders and timings but eventually spotted that it was actually impossible for us to move our troops and attached tanks up to the start line in time for our scheduled kick off. We eventually sorted out the order of march to the debussing point and the final approach to the start line along with the timings in order to scheudle the artillery bombardment. We plumped for a long but possibly rather slow rolling barrage to cover our advance.

With planning completed we moved into the next phase of the game. Almost immediately the plan started to go awry as the road we were planning to use wasn't cleared on time so we were 30 minutes late getting to our debussing area. We then started to move the troops up onto the actual table. Moving through the hedge lined fields proved quite problematic and the units moving up the road found it partly blocked by thre Recce unit holding the start line. Fortunately the MPs attached to the Battalion HQ were able to sort out the jam fairly quickly.

At this point the enemy, who had heard the tanks approaching, started dropping artillery blindly on our moving troops. Luckily we suffered very few casualties and were at our start positions pretty much on time (we had allowed a little time for problems forming up). Then the artillery barrage started and we moved off. Whilst the attack was starting the various MP, medical and other units formed up in the appropriate positions.

Our plan for the assault was relatively uncomplicated. We had deployed our recce and MGs to cover the right flank and the four infantry companies each with tanks attached were advancing two up, two down on the left. A and B companies were intended to push through the hedge line to the left of the village. C and D companies were then to swing right into the village itself and, if necessary, push through to clear the right flank whilst A and B started preparing defensive positions for the anticipated counter attack. 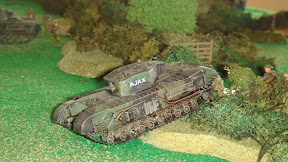 The barrage managed to keep the enemy's heads down and we advanced across the open ground and stream with out too much difficulty. Unfortunately the tanks accompanying D company bogged down in the stream but otherwise things were going well. As the barrage moved on we started to take flanking fire from the village and a minefield was encountered covering the front of the village itself. A and B company started to take defensive fire as we approached the hedge line but a determined advance with the tanks soon put paid to that. Trapped between us and our barrage to the rear their morale cracked and we captured quite a few of the enemy. 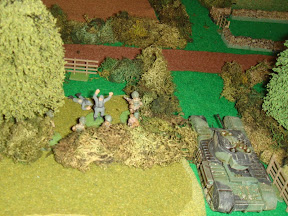 Then things started to go a little more awry. With D company without its armour taking heavy fire B company's flank was exposed to the village and it started to take heavy fire and suffered quite a few casualties. Also our force covering the right flank had been spotted and was taking quite a bit of fire too. A combination of mortar and machine gun fire sorted out some of the problem but we took more losses.

Eventually we organised ourselves and C company started to clear the village as planned and the Germans withdrew their remaining troops.

Our next problem was organising thr defence with our now depleted forces and also clearing the minefield to allow the resupply column to reach us.

Fortunately the enemy took some time to reorganise themselves which gave us just the breathing space we needed (although only just!).

The enemy attack consisted of a large infantry force to the right and front supported by Stugs to the left. Fortnately the infantry to the front advanced straight into one of our preplanned defensive boxes and we could drop artiller on them which put paid to that. However, we also lost most of the rest of B compan to enemy artillery fire and some of our tank support to some well placed German anti-tank guns.

Their armour didn't are too well either as our 17 pounders tooke out every Stug that came into sight. Things were looking a little more difficult on the right flank but with the combined fire of C company, our remaining MGs and the anti-tank crews adding their small arms we managed to do enough for the Germans to have second thoughts. This combined with their failure in the centre and on the left meant they began to withdraw.

It was a really fun game especially with the initial planning element. In hindsight there are quite a few things we could have done better - like read the briefing papers more thoroughly and ask a few more questions! But ultimately the barrage was the key, had that been different I think the whole game would have taken on a completely different complexion.