Following the reunion games Lenin and I decided to extend the weekend and put on another couple of games just for ourselves. The first was a chance for me to get my Dixon Dahomey figures to the table for the first time using Two Hour Wargames' Colonial Adventures rules. Once again Lenin took command of the colonial forces.

The games was set in September 1892, some time after the main French column has begun to advance through the jungle towards the capital Abomey. The column had already fought and defeated the Fon army at Dogba but as a result they need resupply and the objective was to escort an element of the supply column part of the way from Porto-Novo to the main column.

Despite being relatively inexperienced Captain Clouseau was well advised by Sergeant Frakov and put scouts ahead and to the flanks of the supply column. He took command of half the Legionnaires in the van with the remainder under Lieutenant Le Pice at the rear. 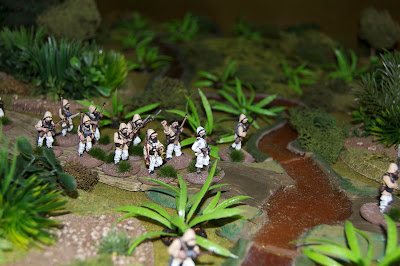 With the jungle being somewhat different to their usual postings in North Africa the scouts were understandably jumpy but after a couple of false alarms the column made good progress towards the river crossing. It was here that a sharp eyed Legion scout spotted the Fon waiting in ambush for them.

Shots rang out from the Fon and they had barely been returned by the Legion when the ferocious Amazons rushed headlong into a bloody melee with them. The Captain went down in that first volley but Sergeant Frakov held the men together in the fight.

The superior training of the Legion meant they were able to maintain the initiative and step back and fire at the Amazons between the bouts of vicious hand to hand fighting but the sheer weight of numbers began to take its toll. 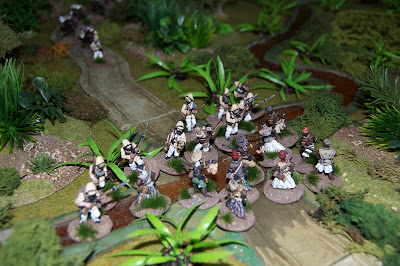 Meanwhile the Lieutenant on hearing the firing began to bring the rear guard up to assist; however by the time he got there the advance guard were forming a brave last stand with the Sergeant. Some of the Fon had broken off to loot the supply column but with the Amazons lying dead or dying, the intervention of the rearguard saw them take a number of the mules and flee into the jungle.

With many of the column bearers having fled too the Lieutenant had a difficult job reorganising the column and was forced to use some of the remaining Legionnaires to carry the supplies. And with their diminished number they began the advance once more.

A couple more false alarms unnerved the troops a little but a genuine attacking force was spotted advancing toward them in sufficient time for a firing line to be organised. The firefight was terribly unevenly balanced. After suffering many casualties and inflicting only a few the attackers melted away.

The column then picked up their loads and marched on...
Posted by Whisperin Al at 8:28 pm