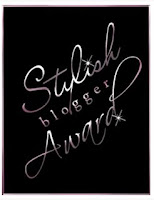 My friend Geordie from Geordie's Big Battles has nominated me for a Stylish Blogger Award on the basis that I started him blogging and, apparently, am also to blame for his insanity (according to his post!)!

I would like to thank Geordie for the nomination and for singling me out as the person responsible not only for his mental state but also for inflicting it on the internet!  Seriously though, it was good of Geordie to nominate me; however, this award seems to have become something of an epidemic across the gaming blogosphere and so I am not proposing to fulfil all the conditions attached to it.  I am supposed to:


I have already thanked Geordie and below I will outline seven things about myself (for those who are even remotely interested!) but I don't propose to nominate any other blogs.  It's not that there aren't lots of blogs I follow that deserve nomination, indeed a high proportion of these have already been nominated, but rather it's the feel that the stipulation of numbers of nominations makes this rather like a chain letter (which is something I detest).

I would also like to thank anyone who reads the ramblings I post here and most particularly those who comment - it's nice to know I'm not just talking to myself!

Anyway, here are the 7 things about me: