Jason and the Bracers of the Titans

With Lenin having taken the plunge and picked up a copy of the new Crooked Dice 7th Voyage rules (plus haveing brought me some rather nicely painted hoplites to add to my collection), we were both rather keen to try them out.

The rules are clearly closely related to 7TV, which we have played before, and have a deliberately cinematic feel.

The scenario was built from the rules and geared around the figures and terrain we had available. So we ended up with Lenin taking the part of Jason and his companions.

The Argonauts were looking to steal the Bracers of the Titans from me, the evil Aeëtes, King of Colchis. 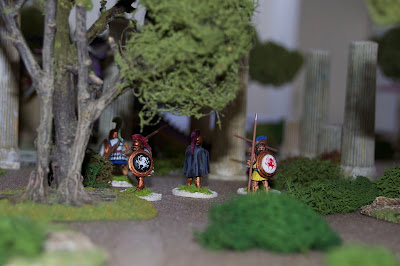 Whilst Jason has his crew and some Amazons he'd picked up on the way, I started with only a couple of mercenaries and the multi-headed Dragon of Colchis to guard the Bracers (which were at the centre of the ruined temple).

Jason and his band advanced slowly, obviously awed by the ferocious dragon whilst my mercenaries tried to get around their flank.  A few of the crew of the Argo broke away from the others to tackle my men. 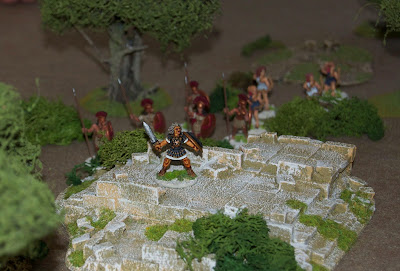 But I had a surprise in store.  I began chanting and summoned of the children of the dragon's teeth. 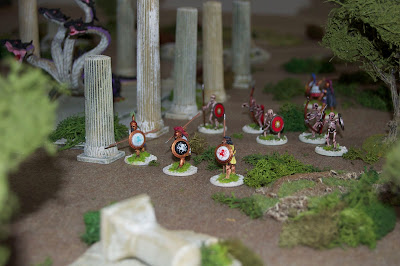 The Amazons began to shower the dragon with arrows and the Argonauts put paid to one of my men but, as the dragon and my skeletons advanced, their fearsome appearance turned their blood cold and they found they could not approach them. 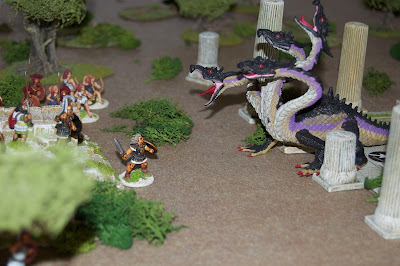 Eventually Jason and one of the other Argonauts managed to overcome their fear and attacked the dragon.  But the Argonaut fell to the dragon's maw and Jason had to withdraw.

With my skeletons ganging up on and putting paid to the Argonauts and the attack on the dragon failing to make headway, the Argonauts retired to fight another day.