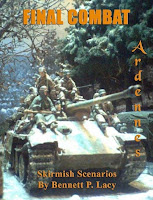 The next scenario book from Britton Publishers I want to look at is Final Combat: Ardennes.  Published in 2008, the book contains 12 scenarios based around the German Ardennes Offensive in 1944.

The booklet is similar in size to Chef-du-Pont, coming in at 70 pages.  After a page and a half introduction there is a single page of publisher's notes and then a rules translation table followed by the scenarios.

Each scenario starts with the historical situation, campaign options (if the scenario is being played as part of a campaign), a description of the mission, orders of battle for each side (followed by any reinforcements), the set up, any special conditions e.g. movement restrictions, artillery/minefields (if any) followed by a brief summary of the historical aftermath and a map (colour drawings of the table layout).  About a third of the scenarios are around a reinforced platoon of infantry or less but the balance require some significant numbers of AFVs and so might well be a challenge in 28mm (unless you have an extensive collection or money is no object!).  It would appear, from some of the maps, that a couple of the scenarios are actually intended to be played at a smaller figure scale.

As you might expect the terrain is expected to be snow covered and around a third of the scenarios require quite a few buildings but otherwise are pretty straightforward with roads, trees and the like; however, one scenario does require a train.

As I'm interested in this particular aspect of the war I found the booklet interesting but have yet to actually play any of the scenarios as I don't have quite the right mix of kit as yet.  The pdf comes in a little over £7.60.
Posted by Whisperin Al at 5:35 pm