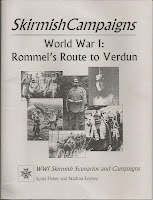 So after our visit to Salute Lenin and I sat down to play a few games. First up was the next in the ongoing Rommel's Route to Verdun campaign, the assault on the village of Bleid.

Several companies from the French 101st Infantry Regiment were holding Bleid and the areas north and south of the village.  Rommel brought his platoon up and prepared for an assault.  The focus of the early fighting was a church near the centre of the village.  The German assault teams set several buildings on fire to flush out defenders and also to create smoke to cover their advance.  The morning fog had still not totally lifted adding to the problems confronting the French defenders. 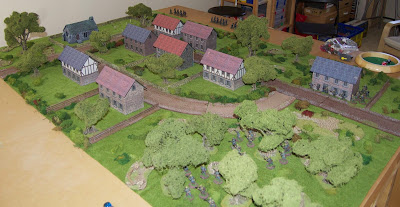 The Germans split their forces with Rommel leading one party through the woods and up the left flank. With the remainder moving up to the first house on the right.  The fog was a real boon to them as it limited visibility. 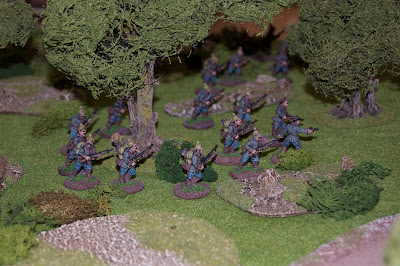 With the first house secured the right flank group advanced on the next house up the road where they encountered their first resistance.  Although the resistance was rather limited as three of the four French soldiers in the house decided to take to their heels and join their compatriots in the adjacent property!  The remaining man fought bravely for France but was overwhelmed quickly. 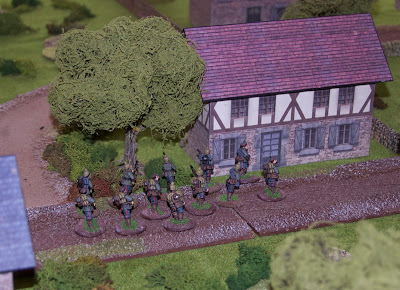 Meanwhile, on the other flank, Rommel advanced from the woods and came under fire from the nearest house.  His group laid down a barrage of rifle fire and then rushed forward and stormed the house.  The defenders were quickly despatched and the house secured.

The group on the right flank decided to move on to the next house.  Not only did they come under fire from the house itself but they were caught in a crossfire from the house across the street and took several casualties.  This setback stalled the advance on the right.  Rommel pushed his men forward to assault the next house on the left and then moved quickly over to the right flank to restart the advance there.  He decided the best way forward was to literally smoke the defenders out.  He and two of the assault section rushed forward and set fire to the house.  They came under fire but were able to complete their task and fall back.  The fire quickly took hold and the French were forced to fall back once again.  As the first spread it also obscured the house across the street and allowed the German advance to continue unhindered. 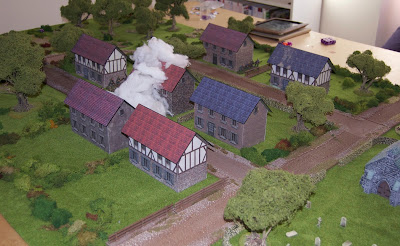 With the final house on the left flank having been secured after brief but bloody hand to hand fighting, the Germans regrouped and moved out of the house across the road to take up a position on the last house in the centre.  However, the French occupying the house weren't about to give it up easily and a hail of rifle fire rained down on the advancing Germans, who hunkered down behind the garden wall. 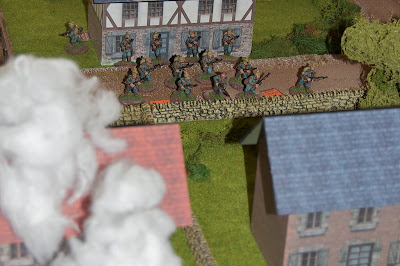 But it wasn't enough as Rommel advanced using the smoke from the burning house as cover and stormed the final property.  Once again the French defenders were defeated and Bleid was taken.
Posted by Whisperin Al at 7:19 pm