Near Suakin, Sudan 1885
The fuzzies have been getting rather too bold of late and it was decided to give Osman Digna a damn good thrashing (six of the best, trousers down) to put him back into his place. So a column left Suakin with the aim of bringing him to task.

The main column is making camp when some fuzzies are spotted and it is decided to send a patrol in force to run them off. Captain "Boko" Fittleworth (Lenin) is given command. Most of the units from the column were able to spare a platoon so the patrol is made up of around two companies of mixed troops. Boko's old chum Captain "Stilton" Cheesewright (me) was sent along to be second in command. The patrol's objective was to clear the area to the west of the column, engaging and driving off any enemy forces they might encounter.

Boko decided to split the patrol into two with Stilton taking the KRRC and Highland detachments up onto the high ground ahead. Taking the cavalry, RMLI and infantry Boko circled around the high ground following an old camel path. Stilton found the going rather tough as the ground was pretty rough on the way to the ridge. This meant he was somewhat delayed. He had a little fright when it looked like the high ground was already occupied by the enemy but fortunately it was just one of the scouts being a little jumpy. Boko also had a false alarm in the scrub ahead but then as they rounded the end of the ridge they spotted a very large body of fuzzy-wuzzies. With the British troops desperately trying to deploy from the column into firing lines, the fuzzies began to advance. 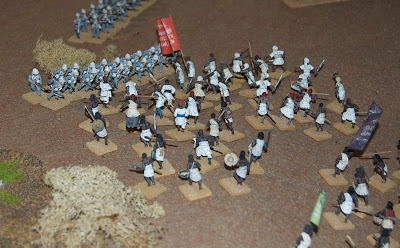 As the RMLI were nearest to the enemy, they took the brunt of the first attack with two units of Beja charging them. With iron discipline the Marines held their fire until the optimum moment and loosed a devastating volley. But it wasn't enough and the Beja crashed into the British line. A fierce melee began and the fuzzies' numbers began to tell.

On the hill Stilton had finally reached the summit and come to the attention of the enemy. A unit of Jehadia infantry, with rifles taken from previous Egyptian expeditions, and some straggling Beja. A few volleys saw off the Beja but the remainder of the patrol was in some trouble. 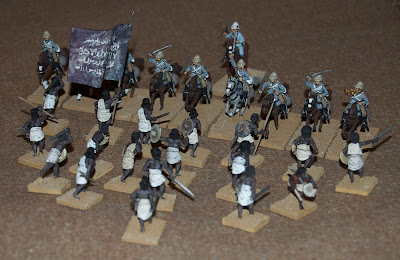 With the RMLI hard pressed the Hussars were the next to receive a Beja charge. Of course they counter-charged and a terrible hand to hand fighting ensued. Meanwhile the Marines cracked under the pressure and the fuzzy-wuzzies broke through to the next infantry line. Despite successful volleys and some hard fighting the overwhelming Beja numbers began to tell and Boko's part of the patrol was swept away. 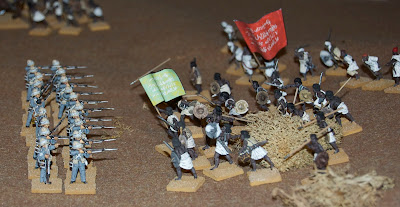 Stilton had turned his units to move to help Boko but realised it was too late and began to withdraw. Unable to simply march away from the advancing hordes he organised his troops into a firing line and began falling back in good order. Volley after volley thinned the enemy numbers but sporadic rifle fire and fanatical charges took their toll; however, in the end the Beja tide broke and Stilton was able to withdraw with his few remaining men.
Posted by Whisperin Al at 8:12 pm