I have been looking for a good set of Dark Ages rules for some time.  Whilst I like Saga it is really a two player game and so doesn't provide a complete answer.  So when I had the opportunity to playtest Dux Britanniarum, the Dark Ages rules under development by the Too Fat Lardies I jumped at the chance.

The core rules are actually pretty well developed but are intended to work within a campaign system which is still being worked on.  They are intended to cover the period following the departure of the Romans from Britain and the arrival of the Saxons.

I set up a game with the suggested Romano-British and Saxon warbands and here's what happened.

The locals had spotted the Saxons approaching and had decided to meet them in the open ground before their settlement.  The Saxons gained the upper hand straight away and decided consult the omens which showed they were blessed.  The British leader decided to inspire his men and made a rousing speech. 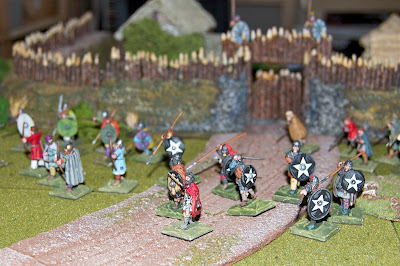 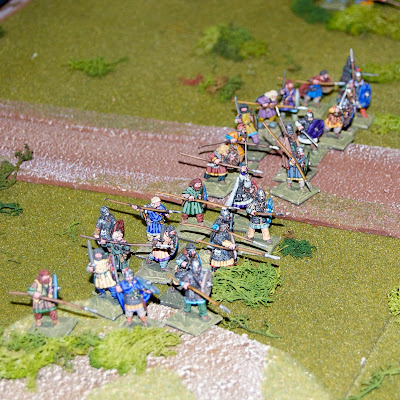 Then the Saxon champion stepped forward and the British champion took up the challenge.  Initially things seemed to be going the Briton's way but then a combination of blows from the Saxon hammered into him and a final thrust sent him to the next world.  The Saxon warband was elated and began to advance. 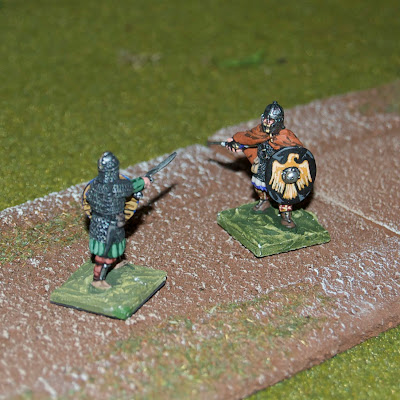 Seeing the approaching threat the British warriors formed a shield-wall supported by the levy. 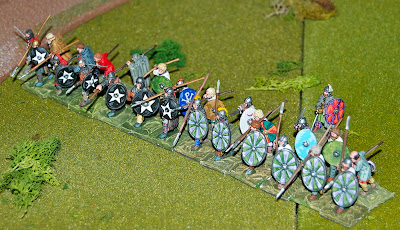 On the other flank the Saxons took the higher ground and formed their own, smaller shield wall.  The Britons advanced under some missile fire. 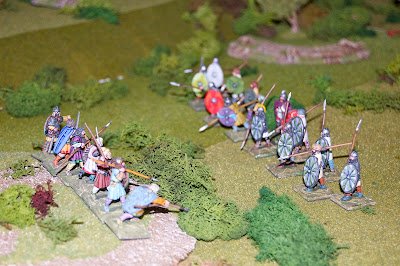 The Saxons also encountered some slings and arrows but swept the British slingers and bowmen aside and threw themselves at the British shield wall. 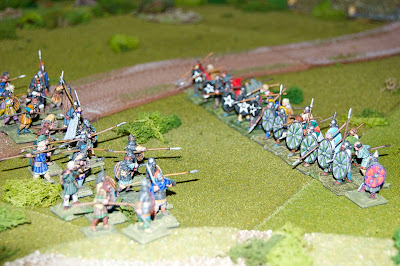 With each side's leaders urging their men on the melee was brutal but the Saxons were thrown back.

On the other flank the British swept aside the Saxon missile troops and charged the small shield wall, killing several men and driving it from the higher ground.  Meanwhile, the main Saxon force, realising they had to act of have their flank exposed charged the British shield wall once again and were repulsed once again.  With the Saxons outflanked they withdrew from the field.
Posted by Whisperin Al at 7:34 pm