Our final game of the weekend was a chance to try out the latest edition of I Ain't Been Shot Mum by the Too Fat Lardies.  I decided to select a scenario from the Defence of Calais supplement (suitably adjusted for 3rd edition and for my available forces).  Lenin took command of the defending British and I took the Germans.

The British troops, from the 1st and 2nd Searchlight Regiment under the command of Col. R.M. Goldney, were positioned in and around the small town of Coulogne and the nearby village of le Colombier. 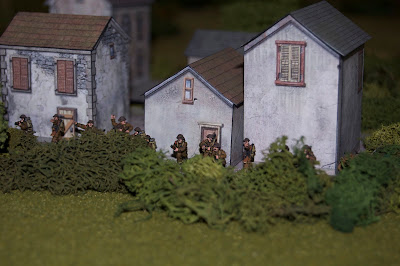 They were facing elements of Assault Group Kruger of the 1st Panzer Division and only had a single actual anti-tank gun and a few Boys rifles.

Having decided not to advance along the south bank of the canal, largely to avoid the bottleneck at the single bridge, the Germans began on a narrow front between the canal and the Les Attaques/Calais road.  This several limited the advantage of their numbers.

The attack began slowly (largely due to checking that things hadn't changed from previous editions of the rules and because I hadn't thought through a proper plan).  The anti-tank gun targeted the first Panzer III but failed to penetrate, which was unfortunate as it then came under heavy fire and was silenced.  However, the two Boys anti-tank rifles faired somewhat better.  They weren't able to brew up the tanks but managed to keep chipping away at them which hampered the German advance.

The Germans chose to try to outflank the British position in the village but some stalwart defensive fire from the village caused several casualties and one flanking force then came under fire from another British group on the hill ahead.  A long slugging match ensued with the Germans being held up for far too long until they eventually whittled the defenders down and broke through.

It was then a race up the main road towards Calais to see if the Germans could exit the table before the time limit.

The German column advanced quickly up the road with one of the remaining undamaged Panzer IIIs in the lead but then the other parts of the Searchlight Regiment revealed themselves, both in front (blocking the route to the objective) and to the flank. 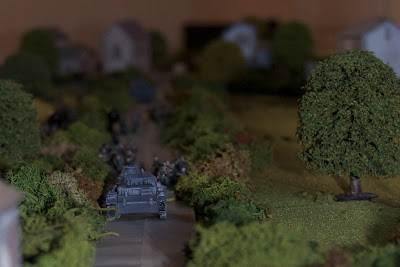 The combined fire not only took its toll but it forced the German advance to grind to a halt and gave victory to the British as their delaying tactics had been successful.
Posted by Whisperin Al at 10:09 pm