Our final game for the weekend was a chance for Lenin to get some of his excellent modern figures, in this case from The Assault Group, onto the table.  It was also a chance to try out some tweaks to the Two Hour Wargames' FNG rules using the PEF mechanics to allow us to both play on the same side.

On 7 May 2000, B, C and D Companies of the 1st Battalion of the Parachute Regiment (1 Para) were deployed from Senegal to Sierra Leone to assist in the evacuation of non combatants from that war-torn country.

Several days into their deployment, two sections from D (Patrols) Company of 1 Para have been detailed to locate and evacuate a four person NGO team known to be operating a clinic and school in Kalima village. The United Nations are concerned for their safety as an armed group calling itself the North East Dudes has taken control of the area around Kalima.

Intelligence reports that the North East Dudes are more akin to a heavily armed street gang than a real rebel movement and that they are proliﬁc users of narcotics. The group is armed with the usual selection of Eastern Bloc weapons, including a number of RPGs.

Each of us took a Land Rover and a section of Paras and, with Lenin on point, advanced up the road towards the village.  We very quickly discovered that the North East Dudes were in the village and none too pleased to see us.

After an RPG round narrowly missed our leading vehicle we quickly pulled off the road and de-bussed.  Each section quickly split into two fire teams and laid down quite a bit of fire on the Dude's first position.  Quickly suppressing them we were about to advance when two more groups of Dudes appeared. 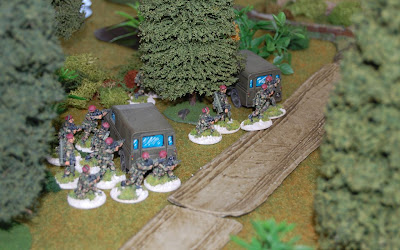 Fortunately most of the Dudes were high (hence the rule amendments) and so their firing was a little erratic, which was lucky since a properly aimed RPG round could have been very nasty.

After having suppressed the Dudes on our right flank I was advancing across the road when I cam under fire from their original position.  With one of my men down we poured fire into the Dude's position and quickly suppressed them.  I managed to get my casualty back into safety behind the Land Rover and then cautiously advanced another team across the road - safely this time.

The main fire fight with the Group to the left of the village was going our way and Lenin was able to push a team forward.  I followed up and we discovered that they had the hostages with them.

Meanwhile my team advancing on the left encountered another group of Dudes who had been trying to outflank us and quickly put paid to that idea.

With the hostages secured and some prisoners taken we withdrew with only the single casualty.
Posted by Whisperin Al at 5:06 pm