Next up Lenin put on a science fiction game using his extensive collection of AT-43 kit but with the Two Hour Wargames' 5150 rules.

I was cast as an officer in Faulkner Consulting, a wholly owned subsidiary of the Parasol Corporation, which is one of the biggest corporate entities in known space. Faulkner Consulting was, in reality, a private military corporation that acts as enforcers and trouble-shooters for Parasol.

My mission was to proceed to the planet Argos IV and extract a three-person biomedical
science team from the Kildare Foundation, another Parasol subsidiary, that has been carrying out a planetary survey. The science team had reported some sort of difficulty, the exact nature of
which was unclear, and had requested an immediate extraction. 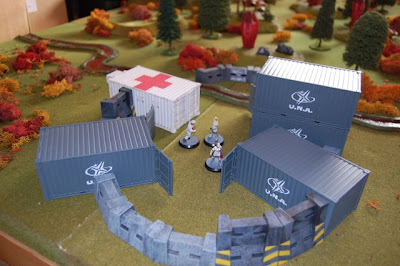 I was briefed that Argos IV was a primeval world with surface conditions not unlike Earth millions of years ago when the most sophisticated forms of life were plants and insects. I was informed that it was doubtful that the science team had encountered any hostile life forms, but it is possible that they are having problems with a rival corporation.

The only suitable landing area for my dropship was some distance from the scientistsʼ camp, so
my team needed to approach it on foot, through the primeval forest. I started with one squad of
light infantry, but each time that the activation dice totalled seven and my side had the higher die score I got a chance to roll on the reinforcement table to determine whether additional forces were available.

Perhaps unsurprisingly it turned out not to be a walk in the park! No sooner had we advanced a little towards the camp than some rather strange aliens appeared along with a rather nasty looking walker. Fortunately the walker appeared to be crewed by a graduate of the stormtrooper school of accuracy and its first two shots were close enough to tip me off but not to do any damage. Fortunately my missile launcher team got a lucky first shot and knocked it out.

Even after taking out the walker it was pretty hard going as the aliens just kept appearing and not only from in front. My first squad took quite a few casualties but reinforcements including a Fire Toad and a second squad meant I eventually managed to knock out the strange devices the aliens were using to transport in and after that it was a lot easier!
Posted by Whisperin Al at 2:12 pm

Email ThisBlogThis!Share to TwitterShare to FacebookShare to Pinterest
Labels: 28mm, 5150, at-43, sf