Wargames Weekend: The Crystals of Death

Our final game of the weekend saw the return of the Doctor, the Brigadier and UNIT.

For a change I took the part of the good guys and Lenin gave me the following briefing:

Routine monitoring of worldwide chemical purchases has detected a disturbing pattern with regard to the purchases being made by the above named corporation. The combination of chemicals is one that has previously been linked to extraterrestrial life forms.

Undercover surveillance of the chemical plant has raised further concerns, when the plant’s security guards were observed wearing strange helmets and carrying firearms. The UK Home Office has confirmed that the plant does not have the authority for armed guards and thus they are just as keen as UNIT to find out what is going on. Consequently the UK Government has agreed to allow UNIT to continue their investigations and take whatever actions UNIT deems appropriate to resolve the situation.

UNIT (UK) has therefore been tasked with raiding the plant, arresting the workforce and seizing all documents and other materials.

Given the possible extraterrestrial link, assistance has been requested from UNIT’s scientific advisor, though his whereabouts are currently not known.

Just to make my life even more difficult here are the rules of engagement:

INSTRUCTIONS TO UNIT PERSONNEL EMPLOYED ON GUARD DUTIES, INTERNAL SECURITY AND DUTIES IN AID OF THE CIVIL POWER IN THE UNITED KINGDOM

1. Before you use force it is your duty to assess the situation and then use the minimum amount of force necessary to deal with it. If you have done this and you are absolutely satisfied that there is no effective force at your disposal except opening fire, you may do so in the circumstances detailed below.

2. You may fire in the following circumstances:

a. On the lawful orders of your superior officer, by word or through written orders.

b. To protect yourself or other persons from death or grievous bodily harm.

c. To protect property which you have been ordered to guard and which is in the act of being forcibly destroyed or removed.

b. Aim at the target e.g. at the middle of the body.

c. Fire only the minimum number of single shots necessary to achieve your purpose.

So going in all guns blazing wasn't going to be an option! 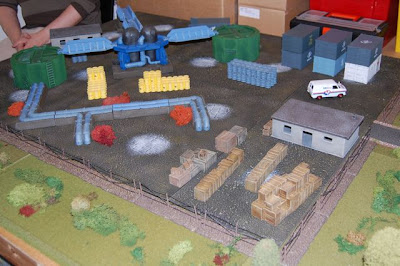 I decided on a simple direct approach. We drove up in a couple of Land Rovers, blocked the main entrance and challenged the guard at the main gate (who appeared to be holding some soft of weapon - obviously in clear contravention of the firearms regulations!). The guard levelled his weapon so we opened fire (unfortunately to no great effect). Fortunately his firing wasn't terribly effective either but on the next turn we managed to subdue him.

We then advanced into the plant, searched the gatehouse and encountered some more guards. All of them were wearing some sort of strange helmet and moving more like automata than normal people. Having taken a couple of casualties we dealt with them we advanced further in.

It was then we encountered something that can only be described a a green shambling carpet like mound. It violently assaulted one of the men so we opened fire on it. It was clearly pretty tough because it took quite some fire to subdue it. But then others appeared.

Two of the men I'd sent off to reconnoitre the other side of the plan reported finding a container with some strange glowing crystals in it. So I ordered them to secure the container and await further instructions. Meanwhile we had a serious problem on our hands. We couldn't use our heavy weapons for fear of a catastrophic explosion and these creatures were proving difficult to suppress. Fortunately they moved somewhat slower than us and didn't appear to have any ranged weapons so things weren't all in their favour.

Just when we were at a loss as to how to proceed I heard a familiar sound and a blue police box appeared on top of one of the chemical tanks. It was the Doctor and Jo Grant who emerged and seeing our predicament the Doctor withdrew into the Tardis to put together a device which would help us. Eventually he re-emerged and the device identified the location of the alien mind control device. With that eliminated we managed to deal with the last of the aliens and secure the plant.
Posted by Whisperin Al at 10:01 am