Last weekend Lenin popped over for another visit and we managed to get a few games in. The first was a 28mm Peninsular game using my expanded Front Rank figure collection and the Too Fat Lardies' Sharp Practice rules.

The scenario was adapted from the Lardies' scenario booklet, the Compleat Fondler both to cope with the smaller number of figures available and my need to move it into my own pseudo Sharpe world.

This was a purely light infantry action with the French advancing across the table and hoping to push through the British force. The British were handicapped with the somewhat inept senior officer and whilst he was in command the French managed to make some headway. A small French unit managed to keep Lt. Blunte and the 95th Rifles occupied on one flank whilst the main French force advanced on the other. 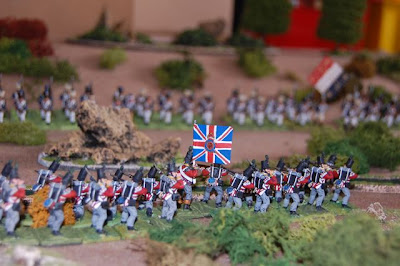 Fortunately for the Brits Captain Smalls managed to catch a French volley and was badly wounded allowing Lt. Blunte to take command. He leapt into action and the British fortunes were transformed with the French advance petering out.

Once again Sharp Practice proved to be an entertaining set of rules and gave an excellent game.
Posted by Whisperin Al at 9:15 pm