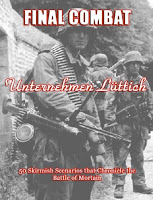 Unternehmen Lüttich is another in the series of scenario books from Britton Publishers for Final Combat.  This book contains a whopping 50 scenarios based on Victory at Mortain: Stopping Hitler's Panzer Counteroffensive

by Mark J. Reardon which describes how the US 30th Infantry Division held off elements of 4 combat hardened panzer divisions in Normandy in 1944.


The book is 128 pages long and, as with Operation Jupiter, is available as either a perfect bound hard copy or a pdf via lulu.com through the links on the Britton Publishers website.  The pdf is around £9.

Unternehmen Lüttich is produced in a single column format and, after 11 pages of contents (there must be a more efficient way of doing this) starts with a set of Publisher's notes which provide a bit of background to the production of the book, sources and notes associated with the Final Combat rules.  Once again, and unlike some of the earlier booklets, this one doesn't a table to help convert the Final Combat stats to other rule sets; however, this is relatively straightforward for Nuts! which is my preferred set for this scale.

The Publisher's Notes are followed by a brief introduction to the historical engagement and then we move onto the scenarios themselves.  The scenarios are broken into six sections and, as with Operation Jupiter, each scenario starts with a contemporary photograph, a very brief background piece, a list of the US and German forces, the victory conditions and a brief description of the historical aftermath.

The final section of the book contains the "maps" for the scenarios and some umpire's notes (once again the "maps" are, in fact, colour photos of actual wargames tables along with a few added annotations; however, the actual scale of the terrain isn't actually stated this time as far as I can see).

The scenarios are generally smaller than platoon level but most do require quite a few vehicles and a couple of them are actually ground to air engagements including an air supply drop.

With 50 scenarios, even if you drop those with too many vehicles and the ground/air ones, you have plenty of interesting material here.  Again, I would have preferred actual maps in addition to the photos but overall I think this is a useful addition to my scenario collection.
Posted by Whisperin Al at 6:35 am