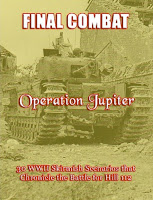 I recently spotted that Britton Publishers had released Operation Jupiter, the latest in their series of scenario booklets for their Final Combat rules.  I had previously picked up a couple of their books and thought this new one might be a good addition to the collection.

Operation Jupiter is a set of 30 scenarios surrounding the fight for Hill 112 in Normandy in 1944.  Bennett Lacy, the author, states that the scenarios are taken directly Normandy: Hill 112 - The Battle of the Odon

by Major Tim Saunders which is part of the Battleground Europe series from Pen & Sword.

The book is 88 pages long and is available as either a perfect bound hard copy or a pdf via lulu.com through the links on the Britton Publishers website.  The pdf is currently just over £7.

Operation Jupiter is produced in a single column format and starts with a set of Publisher's notes which provide a bit of background to the production of the book, sources and notes associated with the Final Combat rules.  As an aside I don't actually have a copy of the Final Combat rules themselves but the level of the scenarios and their presentation is such that they are easy to convert to other sets of rules; however, unlike some of the earlier booklets this one doesn't have a translation table.

The Publisher's Notes are followed by a brief history of the engagement before diving into the scenarios themselves.  The scenarios are broken into eight sections but each can be fought independently.  Each scenario starts with a contemporary photograph, very brief pieces of general and specific background, a list of the British and German (mostly SS) forces, the victory conditions and a brief description of the historical aftermath of the engagement.  The "maps" for the scenarios are all together in the final section of the book.  I say "maps" as they are, in fact, colour photos of actual 5' x 6' wargames tables using, what to my eye, looks like 20mm terrain along with a few added annotations and umpire's notes.  The majority of the scenarios are at platoon level or lower but some do require quite a few vehicles which may make them expensive to do in 28mm.

I think the book is rather useful and having 30 scenarios means that if you don't have the kit for some you still have quite a few to choose from.  Whilst I found the wargame table photograph approach to the "maps" interesting I found some of the angles of the photos unhelpful and overall I would have preferred to have a proper map instead or in addition.  I'm planning to get some Waffen SS to enable me to play some of these with my 28mm figures.

Whilst writing this up I realised that I hadn't done an overview of any of the other Final Combat scenario books I have in my collection - so expect to see a few more posts on those in the near future.
Posted by Whisperin Al at 9:44 am