Wargaming Weekend: Battle at the Ford

So last weekend was another opportunity for Lenin to visit and for us to break out a few games.  First up was a playtest of the new Pike & Shotte rules

As with our previous game Lenin took command of the English and I took the Irish.  The English force consisted of three battalia, two of foot and one of horse.  Each foot battalia consisted of two units of pike, two of muskets and one each of swordsmen and billmen.  The horse contained two units of Border Horse.   The Irish also had three battalia, again two foot and one horse.  The foot were a mixture of Gallowglass, New Scots muskets, Bonnachts, Kern (including a unit of arquebus) and a bow armed unit of the Rising Out.  The horse were a mix of Irish and Scots.

The English was a relief force whose mission was to advance down the valley, across the ford and off the table.  Whilst the Irish simply had to stop them. 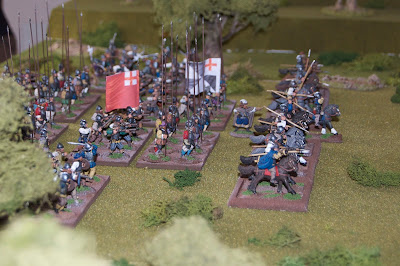 The English began their advance and their horse quickly spotted the units of Kern and Rising Out holding my right flank.  They obviously decided that these were going to be easy meat.  Our bow fire was desultory and the English horse charged home smashing my flank with only the Rising Out managing to avoid the onslaught. 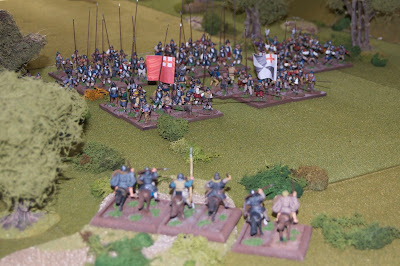 Meanwhile the English foot had continued to march forward.  I advanced my Irish horse to their front and sent the Scots in skirmish order around their flank.  With the impact of their own horse on my foot in mind the English musketeers rushed to the protection of their pike.  With the main body of the English in hedgehog their advance had been nicely slowed I waited for their next move. 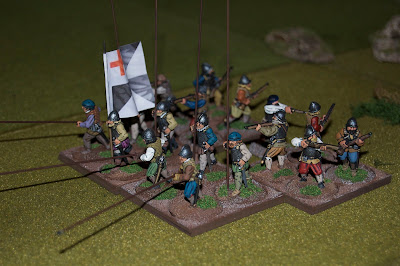 It wasn't long in coming.  Rather than move across the front of my foot to engage my horse, the English decided to move to attack my foot defending the river bank.  Unfortunately for them, the river was deeper where they chose to cross and their advance was considerably slowed.  This gave my New Scots enough time to loose a volley of musket fire into them and one of the English units was destroyed.  The other successfully crossed the stream and charged into my foot, who collapsed and routed off the table - followed by the English horse!

With the English cavalry threat neutralised I could concentrate on their foot.  My Scots horse advanced through the wood to the left of the English and emerged behind them - maintaining their need to stay in their hedgehogs.  However, the English were having none of it and their swordsmen and billmen were continuing to advance. 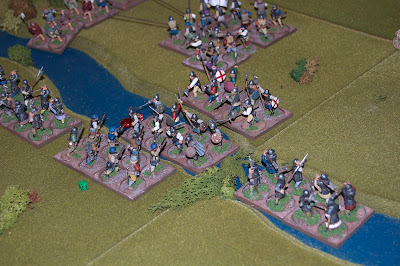 The English mad a beeline for the ford and charged my Gallowglass.  At first this looked like it would work well for the English with the Gallowglass falling back; however, the Irish rallied and the flanking Gallowglass units made a ferocious charge into the English swords and routed them.  They made similarly short work of the English bills.

My other New Scots fired a volley into the leading English pike formation and then the Bonnachts and Gallowglass charged in - at which point the English army's morale broke and the day was ours. 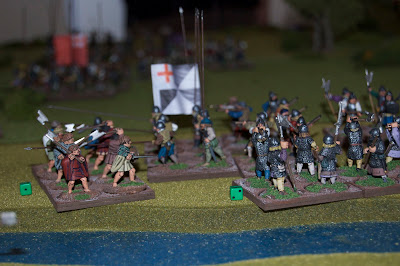 Overall, we were quite pleased with the rules.  Having played Black Powder previously certainly helped.  Although Pike & Shotte do differ is certain areas, it was clear they are derived from Black Powder.  Lenin had more recently read Hail Caesar and commented how different these rules were from those in a number of respects.  I'm certainly going to give these another go once my Montrose figures are all based.
Posted by Whisperin Al at 11:00 am