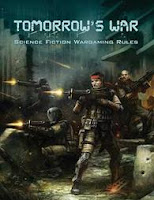 For our final tabletop game of the weekend we decided to revisit Tomorrow's War.  This time we selected the second scenario from the rulebook using Lenin's GZG power armoured troops versus my Denizen Mid Tech troopers.

The scenario took place in Brazil in 2289 with a US operation going a little awry.  US Special Forces were to be dropped into the Brazilian jungle to take out a ballistic missile platform.  Unfortunately the dropship hit a mine and so only six men hit anywhere near the intended drop zone.  Given that there wasn't actually a missile platform (it was actually a mining vehicle - faulty intel) the reception from the Brazilian Home Defence Battalion was somewhat hostile!

The game began with Lenin deploying this six operatives in three groups and me deploying the six Brazilian fire teams on three table edges and their APC support on the fourth. 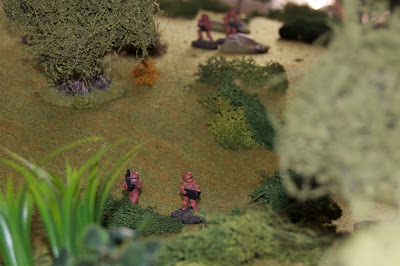 Unfortunately for the Americans, the operative with the missile launcher (the only ordnance they had which could take out the Brazilian APC was on the wrong side of the ridge! 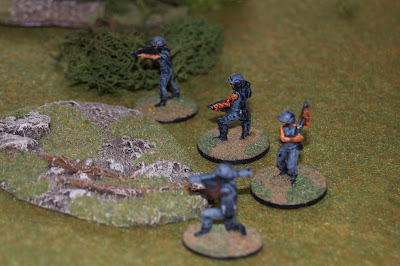 Faced with troops on all sides the US troops chose to open fire and then withdraw to the rocky ground on top of the ridge which provided some rudimentary cover. 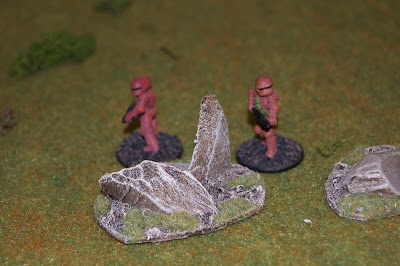 The Brazilians use fire and movement to advance which, along with the heavy covering fire from the APC, put the Americans under real pressure. 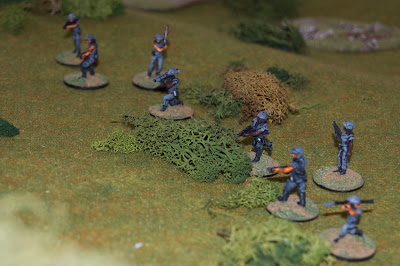 The Brazilian numbers eventually began to tell and the US operatives were knocked down one by one. Whilst they were recovering some of the Brazilians (the others thought better of it!) took the chance and rushed them.  Fearing capture the US troops chose to take some of their captors with them. 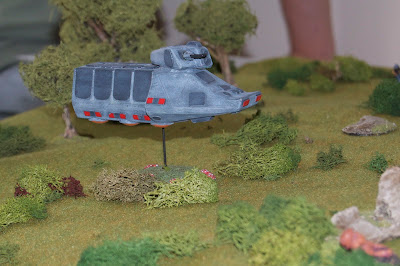 The repeated APC fire allowed the other Brazilian groups to close with similar results.  In the end the US force was neutralised and three of them taken prisoner.
Posted by Whisperin Al at 7:10 pm