Osprey have launched a series of wargames rules booklets, the first two being Dux Bellorum (Dark Ages) and A World Aflame (1918-39).  Given my interest in all things interwar I decided to pick up a copy of the latter.

The book is produced in the standard Osprey style used for their Men-At-Arms series and the like.  It's in a single column format (but only taking up two thirds of the page width) with black text on a white background with various colour tables, illustrations and photographs to provide interest.  It's 64 pages in length including the three pages of sample cards and the unit sheet at the rear.

Following the contents and introduction, the rules are broken into six main sections after which there are sample unit lists, a scenario, a list of the artwork references and the sample cards.  There's no quick reference sheet included, however.  The rule sections are Pre-Game Considerations, Let the Games Begin, Movement, Firing, Melee and finally Morale.

In the introduction the author clears states that they are "written in what is nowadays often called a retro style, and pay homage to rulesets written by such wargaming legends as Charles Grant and Don Featherstone".  This is quite evident, not only in the writing style but also in the mechanisms - mainly D6 with modifiers - even average dice are utilised.

Units are typically 8-10 figures representing a section; however, the author says there isn't a figure scale, nor for that matter is there a ground scale or time scale for turns - all of which places this firmly at the game end of the spectrum in my view.  Units are graded for initiative (2-5) and morale (2-6); officers are graded from 1 to 3.  The rules then outline the structure for Company, Battalion, Brigade and Army levels, although I assume (as is indicated in the scenario) since it is not explicitly stated as far as I can see that individual figures would be representing more than a single man for the larger scale games.

The rules include ammunition supply, weather, snipers, tank hunters, artillery and the like but the key to game flavour appears to be the chance cards.  These are intended to be produced for the specific theatre and some examples are provided at the back of the booklet.  Essentially these are to represent external factors, random events and to control the dominance of certain troop types or weapons. 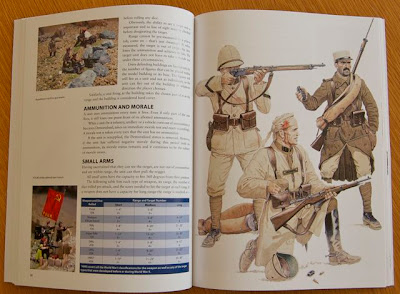 Each turn the players select a unit and then dice for initiative to see which acts first.  Initiative is a D6 modified by the unit's initiative rating, the officer's grade and whether the unit is Confused or Demoralised.  Officers have a command radius - 15" for unit officers but only 5" for higher command levels.

Movement is variable with a base distance plus the roll of one or more average dice unless you are crawling when you lose the base movement.  This can be done by figure or by unit as long as you specify beforehand (the latter would be my preference I have to say).

Firing is determined by weapon type, with each having a number of dice to roll, three range bands (which vary by weapon) and a target number for a hit at that range.  There is also a small number of modifiers largely to address firer and target states.  If you score a hit then the target becomes as casualty.  Rules are also included for firing at vehicles, grenades, artillery and mortars (including smoke) and for anti-tank combat.  This latter section has some interesting elements to cover the various improvised approaches common in the period - petrol bombs, crowbars, dynamite and so forth - as well as more regular methods.  There are also rules for flamethrowers, gas, mines, aircraft and trains.

Melee is conducted by the attacking unit taking a morale test, then the defending unit and then rolling a modified D6 for the units who actually get into hand to hand.  Each figure who loses (i.e. rolls lower) becomes a casualty.

Morale is a combination of the unit morale, officer grade, an average dice and some modifiers aiming for a target number and the comparing with a table if the unit fails - the table distinguishes between advancing and defending, and first and subsequent failures.

The included scenario covers three days of fighting in the Battle of Jarama in 1937 during the Spanish Civil War and has 10 figures representing each company.

Overall the rules have some interesting features; however, I am a little concerned they may be rather fiddly (particularly with the variable movement) - of course only a real game will tell.  Production is generally typical of Osprey but the layout could have been better adapted to the short paragraphs of a set of wargames rules and better proof reading could have eliminated the few more obvious errors.  I think more explanations and examples would also have been beneficial but I suspect the page count will have limited the opportunity for including these.

I will report further once I've been able to test them in action.
Posted by Whisperin Al at 8:11 am