Time for yet another wargames weekend with Lenin. We have a couple of new rule sets to test out this time so we started off with Tudor Ireland using the To the Banners rules by Stephen Danes. It was also a chance to get my Vendel and Graven Images figures to the table again along with the Warbases movement trays which I picked up to do just this sort of larger game.

The scenario was taken from the rules and involved the English troops advancing up a valley through some woods in an attempt to break through to relieve another English force. The Irish had laid an ambush having blocked the road at the most difficult point for the English to pass.

Things started fairly slowly with the English pike advancing in column up the road flanked on both sides with units of shot. The Irish faced them with four units of Kern with their Gallowglas held in reserve further up the valley. 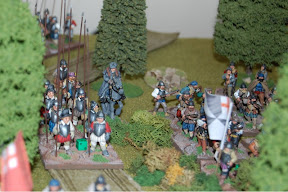 The English advanced slowly toward the Irish barricade and opened fire on the Irish troops. Eventually the English pike summoned up the courage to charge the Irish who stood their ground. It was not an even match and the pike pushed the kern back again and again until having taken as much punishment as they could they turned and fled. The English pike pushed on into the next unit of Kern with similar results whilst the Gallowglas looked on unable to respond. 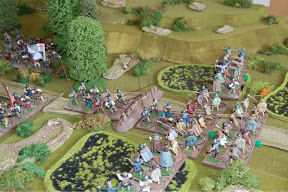 With the English pike advancing but their shot stalled at the edge of the wood the pike now came into contact with the lead Gallowglas unit which was a more even match. The charged and the Gallowglas, probably seeking revenge for the Kern, counter charged. A bitter struggle ensued with the units evenly matched. Then suddenly the tables turned and the Gallowglas managed to get the upper hand pushing the pike back until eventually they routed.

With the English pike streaming back through their ranks the English troops were disordered and back to fall back. With the English attack faltering the Irish took to their heels to set up another ambush further along the path of their advance.

After the game we spent a little while reviewing the rules. We liked the innovative approach to the initiative mechanic which provided some real command and control issues for both sides. Although the rules had some significant omissions which did call into question how thoroughly they had been playtested and could have been laid out in a more accessible manner. We plan to give them another go with a more conventional set of forces to see how they perform.