Both Lenin and I have picked up the Black Powder rules and wanted to know whether they were actually any good under the excellent presentation.  So I decided to pull out my 15mm Essex French & Indian Wars figures and developed a scenario based on the Battle of the Plains of Abraham outside Quebec in 1759.  I chose to make the scenario a conjectural one with some additional French turning up on the British flank (which they were concerned about at the time) to avoid it being a bit of a walkover for the British.

Lenin took the role of General Wolfe and I took Montcalm.  We both deployed our forces pretty close to history and then the playtest began. 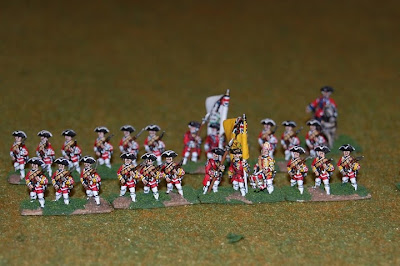 Pretty much straight away we realised the command and control mechanic could make things pretty difficult if the dice weren't with you.  This wasn't the only area where the dice made a huge difference.

Initially the British brigades advanced in a pretty co-ordinated way with only a minor problem keeping the brigade on the flank in contact; however things were a little more challenging for the French.  With a historical deployment the French had two units in column in the centre of their line and in trying to redeploy to allow them to expand things didn't quite go to plan.
The Chevalier de Levis seemed incapable of getting his brigade to respond to his orders effectively and, as a result, a hole opened up in the French line.  Fortunately the British advance was being held up by the French artillery and both the Louisbourg grenadiers and the Highlanders were taking a bit of a pasting. 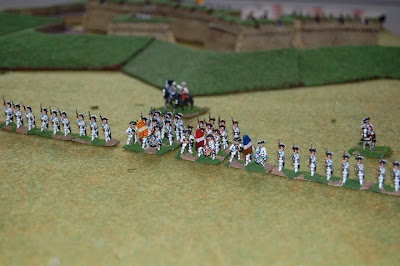 The slowing of the British advance allowed the French to redress their line and then  musket fire started to be exchanged.  It was at this stage that the effect of some unlucky dice rolling became quite apparent.  Lenin was spectacularly unlucky with some key throws when Break Tests were needed and some of his units fell apart.

With things beginning to look up for the French the British struggled to reform their line but managed to inflict enough hits on a couple of key French units to require some more Break Tests.  With these tests passed the two French brigade commanders issued Rally to Me orders but in joining the units they exposed themselves to danger.  More musket fire was exchanged and it was at this point that luck deserted the French.  With more Break Tests initiated for the two units with the commanders attached they both failed spectacularly and fled taking the commanders with them.  This put paid to the French advantage and, at this point, it became clear that, with the third British brigade occupied defending the rear of the British line from the newly arrived third French brigade the British didn't have the superiority in numbers to follow up their newly found advantage.  We had also run out of time so we called the game a draw.
Posted by Whisperin Al at 10:41 pm