Our penultimate game was yet another outing for Nuts!, this time in the PTO. This game was planned largely to allow us to try out the War Against Japan (WAJ) supplement and get some of Lenin's lovely TAG Japanese and US Marines to the table.

WAJ is really intended for US troops to be player controlled and for the system to run the Japanese but since Lenin is only part way through this project we decided that it would be better if I controlled the Japs. WAJ also uses different reaction tables for the US and Japanese troops which we were hoping would add to the period feel.

I was given a platoon of two rifle squads, an MMG squad and their HQ along with a Type 97 Te-Ke tankette. The infantry were all Rep 4 with Rep 5 officers and NCOs but I had to roll for the tankette crew and got a rather uninspiring Rep 3 for the commander/gunner.

I didn't have high hopes for the tankette as I knew the Japanese tendancy to miniaturisation wasn't idea for armour but even so I was surprised at the thing's size - frankly it looked like it was the right scale. But Lenin assured me that not only was it the right scale the US troops had actually put one onto the read deck of a Sherman at one point! Given that Lenin had asked me whether my Sherman was handy I was a little nervous...

The table was laid out with a beach at the east end, jungle to the west, the rocky point to the south and rough ground to the north, where the US troops were dug in. The centre was pretty open (unfortunately).

I decided to have one section advance from the point across the open ground and the balance of the force advance through the jungle to try to outflank the US troops with the tankette moving along a small path in between the point and the jungle. Given that it was a night attack visibility was limited. 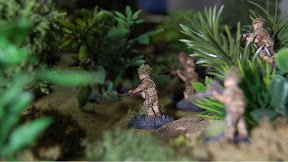 My first squad split into two teams with one advancing with the other covering and things started well. But when we moved within sight of the first US troops a fire fight began. The Japs hit the deck with one man down. As soon as we got the initiative I got the men up, threw some grenades and rushed the US slip trench. Another man went down in the charge but after some bloody hand to hand fighting the trench was taken. It transpired that the US had been hampered as we had encountered their bazooka team and so they were a little undergunned against infantry. Probably a good thing as my men had the squad knee mortar and lunge mine!

The other half of the squad advanced and triggered fire from another US slip trench and again hit the deck. Fortunately the tankette could advance in support but with no MG and a rather poor gunner it turned out to be rather less helpful than I was hoping. Whilst this was going on I had the other squad rush out of the US position they had captured to assault the next in the flank. The combination of more firepower on the US side and more bloody hand to hand meant that, whilst I took the position, that group were decimated.

It turned out that the other US position also contained their officer (who Lenin decided was in the John Wayne mould) who decided to deal with my tankette. He prepared a grenade and charged the tank single handed. Whilst the grenade didn't penetrate the tank crew took fright and withdrew!

Whilst this was going on the remainder of the Japanese force had been making their way through the jungle. When they reached the edge they came under US fire from a couple of positions and were force back briefly. I decided on the same approach and, grenades prepared, threw then and rushed the trenches bayonets fixed. 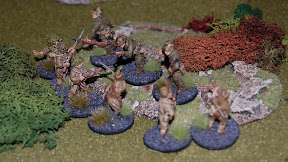 It was at this point that the Sherman made its appearance! So I had the remainder of the men charge the tank. The melee was terrible with the Japanese officer slashing right and left with his sword and small arms and bayonets being used with bloody efficiency at close range. Finally the Japanese took the main US position on this side.

Things went rather differently with the assault on the tank. The US crew used their hull, turret and hatch machine guns to great effect and cut down many of the Japs including the man with the lunge mine! But a couple still got through, slipping under the machine guns and used their grenades. The US tank commander was killed in the blasts and the tank crew then began sweeping their turret machine gun around to try to deal with the danger clinging to the hull of their tank.

With the Japanese having more than achieved their objective in US troop casualties and having lost a large part of their force we decided to call the game. I have to say that I am now not looking forward to having to face the Japanese when we play the next game in the campaign!