Next up was the next part of our invasion of Crete campaign. Fortunately my Fallschirmsjaeger had managed to find some of the rest of their scattered force as the original team took quite a pasting last time.

Our objective in this scenario was to move from Cemetery Hill and take the village of Galatas. I decided on a two pronged attack one side of which immediately came under fire from a bren gun team on the other side of the valley. 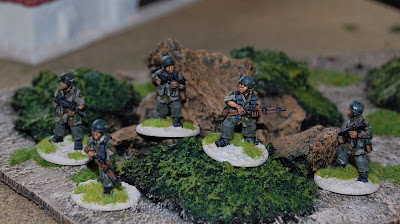 After quite a fire fight I managed to pin down the bren gun team and send some men over to close assault the position. Meanwhile, on the other flank, we had discovered the allied troops holed up in the village. A few casualties were taken crossing the dry gully and advancing to within charge range of the buildings. We just needed to keep the allies heads down long enough for a close assault. 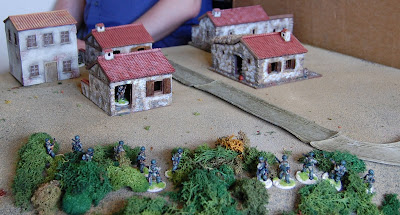 With the bren gun position neutralised on the left flank I was able to put some firepower on the flank of the village and the troops on the right assaulted the buildings. One succumbed quickly but there was a vicious hand to hand fight for the second building but in the end my superior numbers made all the difference.
Posted by Whisperin Al at 7:48 pm