Our final game was a playtest of the Fear and Faith rules from Ganesha Games. These are a set of horror rules based on their Song of Blades and Heroes engine.

The scenario was a simple "last man standing" over possession of an ancient Greek site during World War Two. I played to type as the forces of darkness with a Vampir Gruppe consisting of, surprise surprise, a vampire (and a Nazi one to boot), two She Wolves and six zombies. Lenin had a small section of British infantry accompanied by an army chaplain. 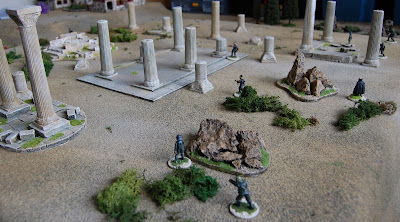 Things started fairly slowly as we got familiar with the rules and my zombies advanced slowly across the table chanting "Gehirn". Lenin found it tricky to dispatch the zombies as they needed an aimed shot (to the head) and so, after an initial advance, decided on a more defensive strategy. 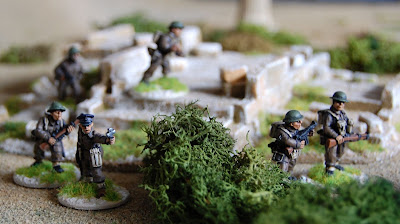 I decided to take the offensive and assumed gaseous form with my vampire in order to infiltrate the British position. Eventually I managed to materialise among them and a battle between the force of light and dark was joined. Unfortunately for the light the chaplain was unable to skewer me when he had the advantage but I gave him a nasty nip when it was my turn. As the chaplain was the only one with the wooden stakes the Brits decided discretion was the better part of valour and withdrew.
The main issue I had with the rules (which I whinged on and one about - as Lenin would happily tell you) was the need to roll to activate each figure. My dice rolling is erratic at the best of times and so this made the game a little frustrating. I also had a bit of a problem rationalising why my "big bad" character needed to roll to take any actions at all. Lenin did point out that the rules did have an option to avoid this and that some of the attributes (for example fear) would have been better substituted for others which would have made the game play out slightly differently.
All in all I'm not sure that the rules provide many advantages over others we already use other than being a little simpler (which is not to be sniffed at since I have difficulty remembering even the most straightforward sets). We're going to take a little time to reflect on them in order to decide whether to give them another chance or try some other alternatives based on our existing stock of the rules.
Posted by Whisperin Al at 7:50 pm