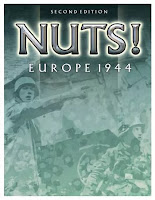 Some time in March I suddenly realised that our first club meeting would be on the 9th of April, the anniversary of the Nazi invasion of Denmark in 1940.
Having “invested” in a platoon of 28mm Danes from Great Escape Games I really didn’t want to miss the opportunity and so I put on a game based around a skirmish that took place near Hokkerup on the Jutland peninsula.
The encounter we were commemorating, the ambush of a leading German reconnaissance unit, was captured in a 1946 painting by Anna Maria Mehrn which was, in part, the inspiration for choosing this particular scenario along with a scene (likely inspired by this engagement) from the Danish movie 9. april.
The Danish army went on full alert at 13:30 on the 8th of April and were held back ready to take up positions in the event of a German invasion. A thorough reconnaissance had been made regarding defensive positions but the Danish government had given strict instructions that units were not to be deployed near the border nor was digging or other fortification to be undertaken in order to avoid provoking the Germans. Despite this the Germans crossed the border at around twenty past four on the morning of the 9th.
Our intrepid 3rd bicycle platoon of the 2nd Company, 4th Cyclist Battalion supported by the autocannon and light machine gun sections of the 2nd platoon Afværgekompagniet (Anti-tank Company) , 2nd Battalion, Fodfolkspionerkommandoet set off from their barracks at just after four thirty and took up positions just after 5am.
They hastily erected a roadblock before sighting the armoured cars leading the German column at half past five. Lieutenant H.J. Højerslev had overall command with Second Lieutenant A. Olsen commanding the anti-tank sections. 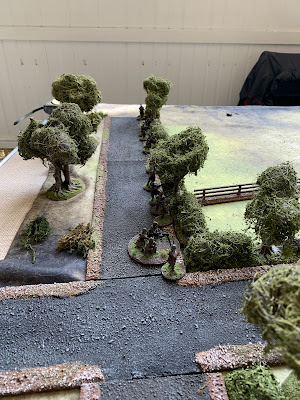 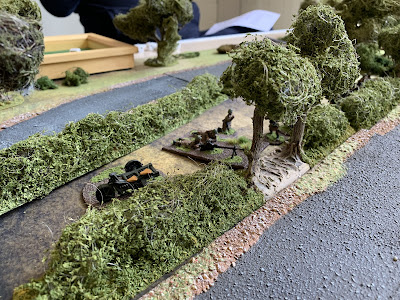 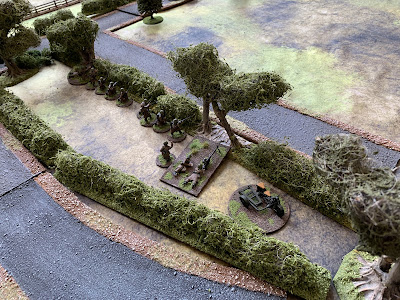 The team manning the 20mm auto cannon was led by F Jensen accompanied Gunner Nørholt and Loader Eliasen as immortalised in the painting. 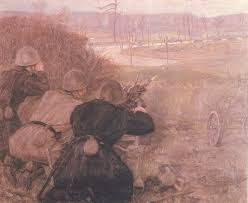 The opposition is less well documented so I had them facing two SdKfz 222 armoured cars, a motorcycle section and two more sections mounted in SdKfz 251 half-tracks supported by a Panzer II. 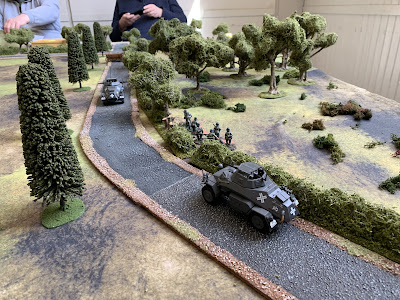 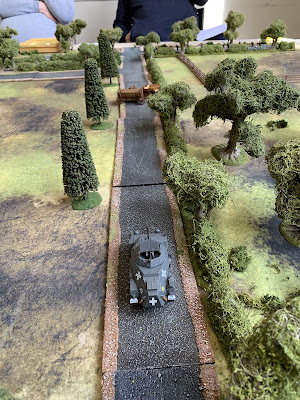 I used the Nuts! second edition rules from Two Hour Wargames for the game.
The encounter saw the Danish auto cannon taking out both of the armour cars and the advancing German infantry taking heavy fire. In the end the Danes were forced to withdraw but they had delayed the Germans significantly. 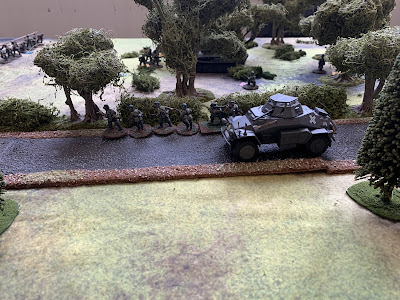 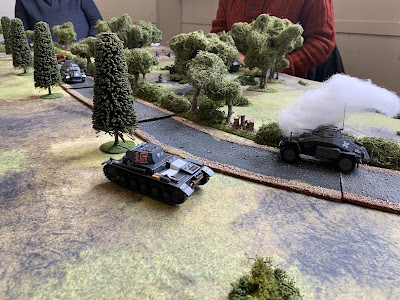 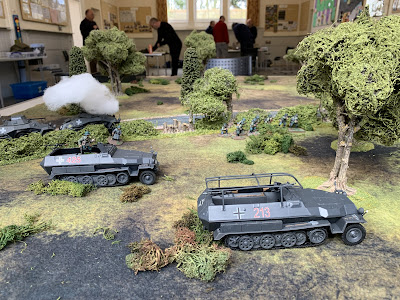 In the end the game lasted almost as long as the entire Danish resistance as despite the valiant defence put up by the Danish armed forces against overwhelming odds the Government surrendered at just after half past eight in the morning.
Posted by Whisperin Al at 10:56 am