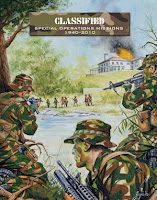 The latest supplement for the Force on Force rules dropped through my letterbox this morning.  This one is entitled Classified: Special Operations Missions 1940-2010 and, as you might expect, covers special forces missions from the second world war to the present day.

The book is in the standard Force of Force style and runs to 136 pages.  The introduction starts by talking about special operations and wargaming, explains what makes an operation "special" and then addressed the differences in this book from the other supplements.  This is followed by new rules for special operations forces and then there are three scenario sections covering historical, generic and "Hollywood" operations.  A selection of current special operations forces (US, Russian, European, Canadian, Israeli and Asia-Pacific) are then described along with a miniatures guide and a glossary.  The bok finishes off with a bibliography and the book artwork references.

The scenarios sections contain 9 historical, 6 generic (including two mini-campaigns) and 3 "Hollywood" ones:


The section on current special operations forces is more of an overview and general description rather than sample organisations as the forces for these types of missions tend to be put together on a case by case basis depending on the specific needs and availability.

This book covers quite a period but provides plenty of interest and inspiration for smaller special forces games.  I'm certainly keen to try a couple of these out!