WW2: Sound of the Guns

After avoiding the unwelcome attention of the German flak unit, Lt. Summers and Sgt. Bunkum worked their way towards the sound of the guns.  On their way they met up with another two groups of paratroopers including a Lieutenant.  Their way ahead was blocked by an emplaced German machine gun and they needed organising to deal with it and quickly clear the nearby buildings in order to secure the area. 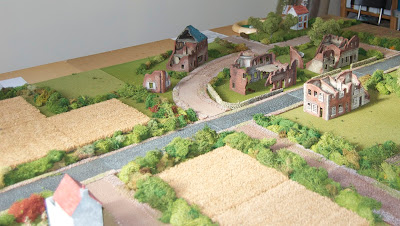 Summers and Bunkum quickly organised the men into two groups, one to advance down each flank.  Unbeknownst to the Americans, a second German MG team were just moving into position behind the first. 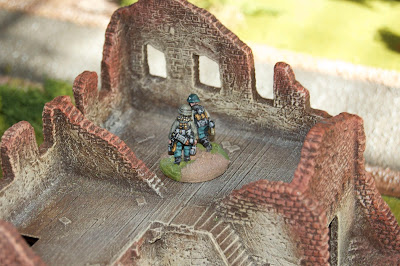 Lt. Summers led his team down the side of one of the fields using the bocage as cover. 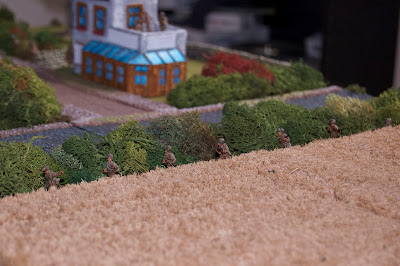 Meanwhile Sgt. Bunkum (guiding the other Lt.) cleared the first building, advanced across the small field and then across the first lane. 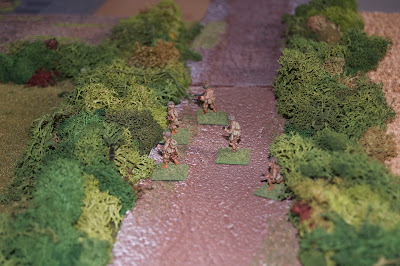 Everything was going to plan until Summers led his men at the double across some open ground and was spotted by one of the German MG teams.  The MG42 opened up but fortunately Summers and his group were close enough to a stone wall to throw themselves behind it and out of the line of fire.  As a result the Germans redeployed their second MG team.

Both Summers and Bunkum organised their men into two groups, one to assault the buildings and the second to provide covering fire.  Clearing the first couple of buildings was a textbook exercise but they were unoccupied.

Bunkum managed to get his group into the building adjacent to the one occupied by the German MGs. They prepared their grenades and popped up to throw them.  Despite the hail of bullets the grenades were thrown but a couple of men went down including Bunkum - fortunately he was as Hard as Nails and it turned out only to be a flesh wound.  The grenades despatched the first MG team.

Meanwhile, another group of paratroopers advancing toward the MG fire, arrived on the flank (reinforcement roll).  They decided to move forward and assault the building with the MG teams in it. 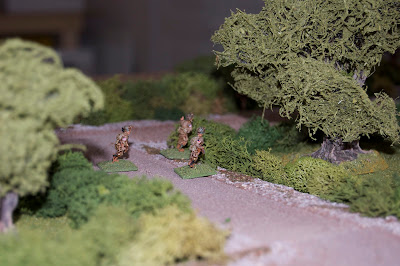 Their first group was immediately spotted by the second MG team and came under heavy fire taking two casualties including their senior NCO.  Their second group had moved to the rear of the building and were able to rush across to it without being spotted.  Grenades at the ready they dropped them through the windows and rushed in following the explosions.  Unfortunately the MG teams were on the first floor and protected by the building so the paratroopers moved into close combat.  Despite their physical fitness and training the Germans were clearly combat veterans as they subdued all four of them.

With the MG team now resuming firing, Bunkum shouted across the street to Summers' team, who were now in position.  One of his team had been a Ball Player before joining up and he pitched the grenade right onto the German team killing them both.  Bunkum's group then advanced and secured the building. 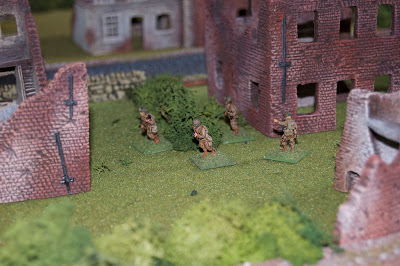