"They jumped much too low from planes that were flying much too fast.  They were carrying far too much equipment and using an untested technique that turned out to be a major mistake.  As they left the plane, the leg bags tore loose and hurtled to the ground, in nearly every case never to be seen again.  Simultaneously the prop blast tossed them this way and that."

So when Sgt. Don Bunkum hit the ground he found himself alone in the middle of a field surrounded by thick hedgerows.  He decided to move to the nearest edge of the field and after forcing his way through the undergrowth found himself looking into a small lane.  He spotted what looked to be an equipment bundle but to his dismay it was empty. 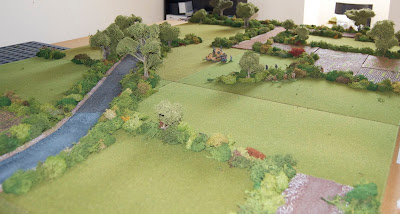 Meanwhile, the nearby German anti-aircraft unit were enjoying a well earned break after all the initial excitement. 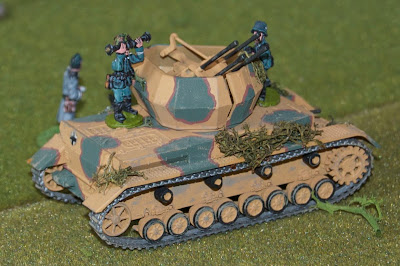 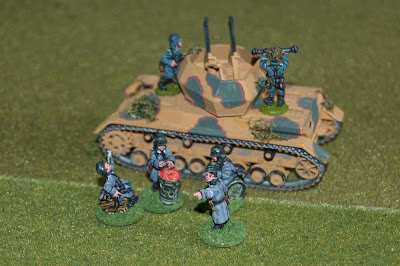 Hearing noises to his left Sgt. Bunkum decided to follow the field edge to investigate.  He quickly identified that there was movement on the other side of the bocage and, once again, began to force his way through it.

On the other side was Lt. Summers and two other men he didn't recognise.  They had obviously attracted the attention of the flak unit as a small patrol was advancing across the field towards the hedgerow behind which they were concealed. 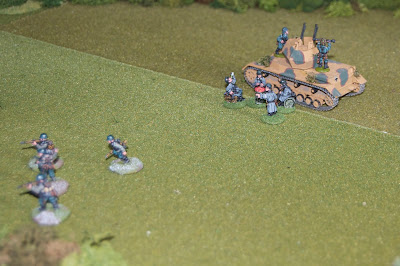 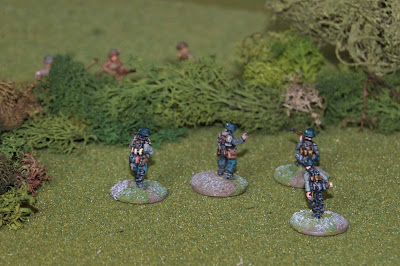 Lt. Summers ordered the men to open fire and soon a hail of bullets rained down on the advancing Germans. 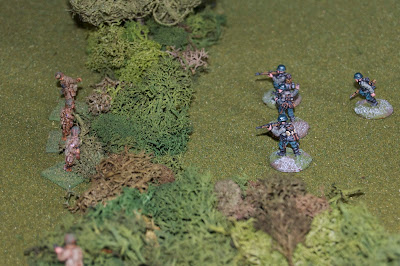 Two of their men fell in the first burst but their NCO returned fire with his SMG and one of the paras fell with the other ducking back behind the earthen bank of the bocage; however, Lt. Summers clearly wasn't phased and returned first cutting the German NCO down and sending the remaining member of the patrol scurrying back to the flak unit.

Having now stirred up a hornets nest and seeing the four barrelled flak gun being rotated in their direction the paras decided it was high time to withdraw and slipped away across the field before all hell broke loose. 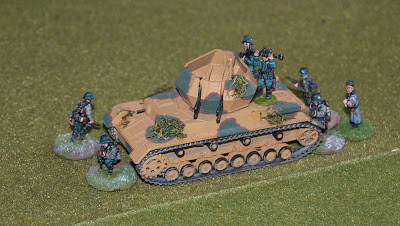 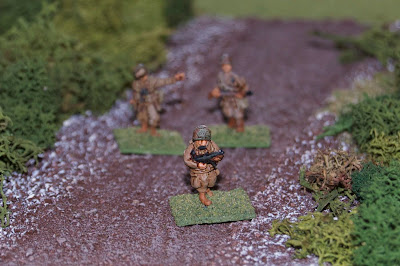 The combination of the anniversary of D-Day and the purchase of Blood Upon the Risers was irresistible and so I set up the first scenario for a solo game this morning.  I rolled up my character who turned out to be a Rep 5 NCO who was a Born Leader and as Hard as Nails.  He quickly became the no nonsense Sergeant Don Bunkum.

The first scenario has you starting with only your star who is trying to hook up with his unit.  You randomly determine where you land on the table which has plenty of bocage, a German anti-aircraft unit and two markers or PEFs (Possible Enemy Forces).  The first turned out to be an equipment bundle which was, unfortunately, empty.  The second split into two which ultimately turned out to be the German patrol and the other US paras.

I was pretty pleased with the way the game turned out.  I'm looking forward to the next game now...
Posted by Whisperin Al at 12:44 pm