When KR Multicase originally sold their cases (back when they were KaiserRushforth) they had 36 compartment tray (F3T) which was 32mm deep and so suitable for 28mm figures on 1 inch bases.  Then they issued a tray with 40 compartments (N3T) of the same depth and recently they have a 50 compartment tray (M3T).  I did a comparison of the 36 vs 40 compartment trays when I first got one of the latter (see here) and now I have a box of the 50 slot trays I thought I post some comparison photos against the 40 slot tray.

Obviously the main difference between the three trays is the slot size:
I wasn't really happy with the 36 slot trays because the slots were too big for all but the largest of figures and as I don't have many of those I wanted one which was a little more of a snug fit and also more space efficient.  I have been happy with the 40 slot trays but even these are often taller than I need even for figures with bayonets.  So with space still a concern I was rather interested when they released the 50 slot.

Here are the 40 slot and 50 slot trays with some 28mm figures from the Perry Sudan range: 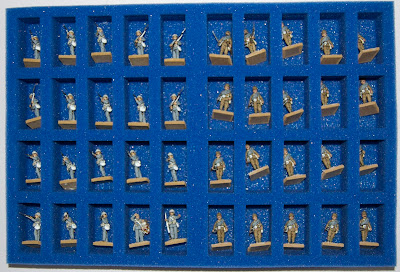 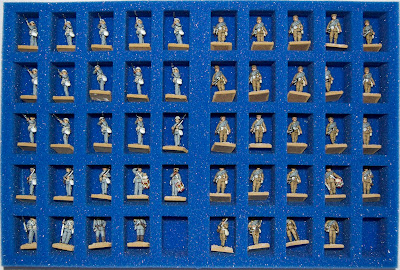 If you are counting you will have noticed that I have managed to get additional command figures in the new tray which were stored in a separate tray (a huge relief for my OCD!).

Here are some close up shots of a single row of 5 slots from each:

As you can see even the shorter slots in the new trays give these figures plenty of room - of course the others with bayonets are a tighter fit but only the figures running at high porte have the blades actually sticking into the foam.  Incidentally the figures in the pictures are on 20mm bases.

Clearly figures with spears and the like are often going to need the larger slots of the 40 compartment tray but for everything else the extra 10 slots per tray are a huge improvement.
Posted by Whisperin Al at 1:51 pm

Email ThisBlogThis!Share to TwitterShare to FacebookShare to Pinterest
Labels: KaiserRushforth