I finally finished basing the first figures for my North Africa / Mediterranean project. The figures are all 28mm from Artizan Designs but, as you can see I have decided to take a slightly different approach and focus on the French.

First up the opposition - a selection from my Afrika Korps: 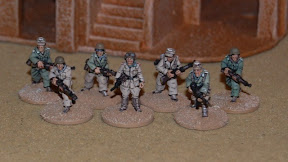 And now some Goumiers: 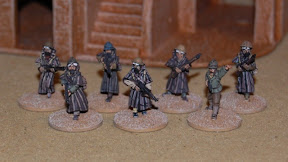 These chaps had a pretty fearsome reputation but ended up with quite a mix of equipment (some of it obtained through slightly dubious means!)

I plan to get these to the table soon and follow up with some more traditional infantry. I will be using Artizan US figures to represent the American equipped French (which will also allow me to use them in their more traditional role too).