Our latest weekend of wargaming was a little later than intended but once again Lenin was kind enough to pop over and gaming commenced.

The first game was Great War and so gave a chance for me to use my new trench along with my Brigade and Scarab late WW1 figures. Lenin took the Germans and the trench with me on the attack with Les Poilus. Through the Mud & the Blood are our rules of choice for this scale and period.

The game started with a French artillery barrage, first on the German wire and then moving onto their trench line. Meanwhile the French advanced up the table, trying to make best use of the cover available from earlier shelling. 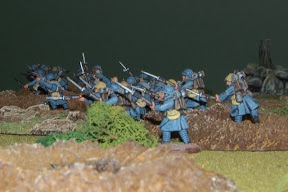 Initially the I had difficulty spotting the Germans, probably not surprising after the barrage but they soon recovered and we came under fire. Unfortunately for Lenin the Germans didn't have the benefit of a heavy machine gun and, whilst their Maxims gave the French a few problems, they were still able to advance.

Having specially picked up some VB grenade launchers from Scarab (Brigade only release their's after I had bought the Scarab ones) I was somewhat less than impressed by their performance. With a decent range and treating cover at one level lower than normal, if they hit, they do have some advantages; however, losing half the dice for acquiring a target and only having three in the section hampered their effectiveness. The Chauchats proved a little more reliable than usual, actually laying down some fire rather than simply jamming each time they were fired.

The French slowly advanced across the table, mainly due to the card turns rather than any special ability on my part. The Germans, who had sensibly taken cover in their dugout, eventually plucked up the courage to move up to the fighting step. 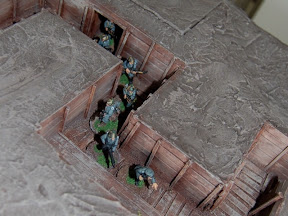 However, a squad advancing up the communication trench had to cope with one of their original units deciding they had had enough of shelling and French fire and were attempting a withdrawal. The resultant confusion gave the French a chance to move up with only limited return fire.

The French platoon sergeant was hit which slowed the advance on the left flank but the Lieutenant kept things going in the centre with the Grenadier section. 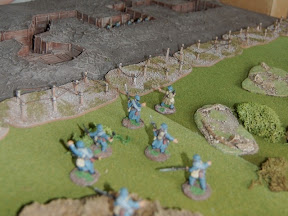 Eventually the French reached the wire, which hadn't been cut by the barrage but was crossable. Fortunately the Germans had taken a bit of a pasting and weren't able to take advantage of the French being hung on the wire. The Lieutenant and his men made the German trench and despite a heroic counter attack by the German Feldwebel and a couple of men the French held on.

With more French crossing the wire the Germans decided to withdraw and make ready for a more serious counter attack - which will have to wait until another weekend (not least because I need to build the rest of the trench network!