Having spent the first day of gaming using the Lardies' rules we decided to have the second as a Two Hour Wargames' day. The first game was a 28mm WW2 scenario designed to allow me to field a few toys which had not seen the table before including my Bolt Action Soviets (which are all Lenin's work BTW).

As part of the Petsumo Offensive the Soviets were an advance force which had been pushed through the German defensive lines under cover of the poor weather to assault and, if possible, capture the Luostari/Pechenga Airfield to hamper German air operations in the area.

The Soviets initially began with a Leitenant and two squads of Razvedchiki (Rep 4 Scouts) with the possibility to being joined by parts of the main attack force. The Germans had an Obergefreiter commanding a single squad and the flank crew in defence.

The initial fog lifted but it continued to snow reducing visibility (to 16") and hampering movement (-25%). With the conditions and the Razvedchiki's camouflage and training (stealthy) they were hard to spot initially; however when one of their snipers moved forward to engage the German gate guards he was spotted! The Germans tried to open fire with their MG42 but found the mechanism had frozen and were forced to take cover. The Soviets took advantage of the gate guards' predicament and rushed forward to the perimeter fence. 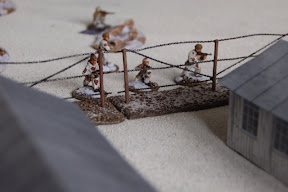 With the alarm having been raised the German forces let into action; however the troops in the buildings near to the gate had something of a shock when they came under fire when leaving their barracks! 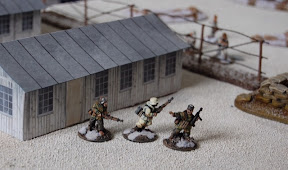 Fortunately the flak crew were not within sight of the Soviets and reached their position unscathed. After a couple of near misses one small group of German troops reached the gate position but under fire and having to leap for cover. A Soviet grenade quickly followed but fortunately casualties were light for the Germans.

The other German group, who had been trapped in their barrack block by the advancing Soviets used a rear window to escape, disappear into the falling snow and take up a covering position behind some trucks near the ammunition store and fuel dump.

Meanwhile a Soviet sniper trying to get a bead in the Flakvierling was spotted and regretted it! The German unit at the gate decided to return the favour to the Soviets and tried dropping a grenade over the sandbags onto them. Unfortunately he fumbled the grenade and it landed back in amongst them! One of the Germans managed to leap out over the sandbags but the others were caught in the blast.

More Soviets had now joined the attack but reluctant to move forward on the left flank in the face of the flak unit they used the masking of the falling snow to move to the right flank where a hole had now been cut in the perimeter wire.

With the Soviets through the fence there was a last desperate fire fight between them and the German unit by the trucks. The Germans gave a good account of themselves but were overwhelmed by the Soviet numbers.

With clear access to the ammunition and fuel and with no reinforcements appearing for the Germans (so much for 7 being the most common number rolled on 2d6!) the Soviets achieved their objective.