Wargames Weekend: Beyond the Pale

Last weekend was another of our quarterly gaming weekends. We decided for a little bit of an experimental first day with a new period and some modified rules and then a playtest game of some others.

First up was a chance to get my Vendel Tudor figures to the table. I bought these some considerable while ago (as I recall I collected them a Salute when it was at Olympia!) but haven't settled on a rules system. The figures grew from my original Border Reivers project and when Vendel added the Irish figures I was persuaded to start a new project. I bulked out the pike with some figures from Graven Images which, whilst bulkier, do mix reasonably well.

Having done plenty of reading about the period I thought my best bet was to model the harassing the column type engagement with formed English troops advancing through Ireland being attacked on the way by the locals rather than the later more formal battles of Tyrone's rebellion. This presented a bit of a problem when looking for suitable rules . Two Hour Wargames' Colonial Adventures rules may seem an odd choice but when I went back to basics the regular formed troops versus irregular troops seemed to me to be a common theme. So I created some new reaction tables and added additional tests for forming units and reloading muskets and a new set was born.

Our playtest scenario was a simple one with an small English column advancing up the table to a small ford. I used the Colonial Adventures patrol scenario which provided enough mechanics to deal with the potential enemy forces (PEFs). The English were given two units of calivers and one unit each of pike, billmen and border horse. The horse came on first and got a little ahead of the main infantry column when they spotted some Irish. These were resolved as a unit of Gallowglass and some Kern. The former decided to charge from their hiding place and the English horse managed to counter charge. It was a bloody encounter and the smaller unit of horse came off worst with the Kern simply looking on the whole time.

This little fight gave the column the chance to advance and form up. 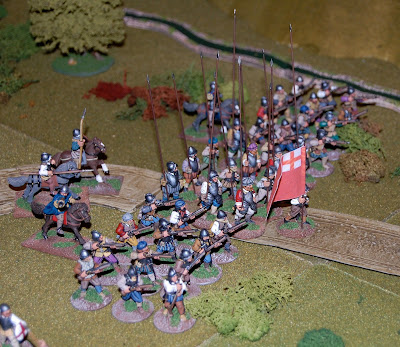 They sent the billmen off to scout through the woods and they managed to spot some Irish horse and some archers. With no real ranged weapons the billmen took a couple of showers of arrows and decided discretion was the better part of valour and retreated to the column with the archers following up cautiously. Meanwhile having taken some caliver fire the Gallowglass and the Irish horse decided to attack the English head on (probably not the wisest move but we needed to test the rules!). The English shot bore the brunt of the assault and whilst one wing took some serious casualties the other managed to hold their own.

Having suffered quite a few losses the Irish decided to melt away and leave the slightly battered English column to carry on their advance. Of course who knows what might await them further up the road!?
Posted by Whisperin Al at 8:55 pm