Peiper At The Gates 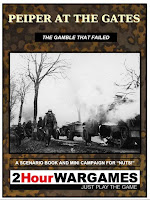 Two Hour Wargames have just released Peiper at the Gates a scenario book and mini campaign for their Nuts! WW2 rules. The booklet was written by Darby Eckles, who was responsible for FNG Vietnam rules, and covers the Ardennes offensive by the Germans in December 1944, often known as the Battle of the Bulge.

The booklet is 42 pages in black and white with a colour front and back cover and contains a brief introduction, additional rules, tips for playing solo and 11 scenarios. Judging from the maps the ground scale of the scenarios does vary somewhat with some being nicely compact and some rather larger in scope. Each scenario has a brief background, the scenario description, objectives, setup (which is based on rolling on various tables for forces), which special rules are in operation, map notes and the impact of results on subsequent scenarios.

The booklet is clearly intended to provide a player with a small campaign for a US squad which can move from scenario to scenario.

Since I am planning to play this using my 28mm Artizan/BAM figures on a 6 x 4 table I was a little concerned that some of the scenarios did look a little larger in scope than I could cram on my table without it looking absurdly cramped; however, the notes in the booklet do indicate the maps are intended to be indicative rather than prescriptive. Of slight;y more concern is the likelihood of a significant number and variety of vehicles finding their way into the various games. At 20mm, or even 15mm, this would be less of an issue by at 28mm the availability and cost of vehicles is something that is a serious constraint. The Americans can have jeep, half track, M8, M4 (75 or 76) and/or M10 depending on the relevant rolls. The Germans could have SdKfz 234, 251 (with or without IG), Pz IVH, Panther or Tiger II. So I may have to limit the possibilities to the vehicles I actually have available (or this could become somewhat expensive!).

Overall, the booklet is an interesting read and looks like it should produce some challenging games (the solo options using Nuts! also make it more likely to see an outing) and the additional rules look to add some nice period flavour.
Posted by Whisperin Al at 7:08 pm