First Look: Algernon Pulls it Off! 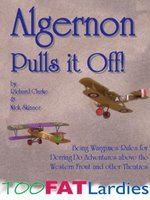 Algernon Pulls it Off! is a set of World War 1 air combat rules by Richard Clarke and Nick Skinner of the Too Fat Lardies.

The rules are derived from their Bag the Hun Second World War air rules. They are hex based but reference is made to adapting them to avoid the need for a hex cloth. The rules include the two usual Lardies' staples, card based initiative and blinds. The cards include multiple cards for the better pilots but all appear each turn (i.e. without the Tea Break mechanism from I Ain't Been Shot Mum!). All the usual manoeuvres, tailing and the like are catered for, and anti aircraft fire, bombing and balloon busting also make an appearance. Stats for almost 50 aircraft are present (including all the usual suspects).