I know I am rather late in posting this but I thought I would do it anyway. 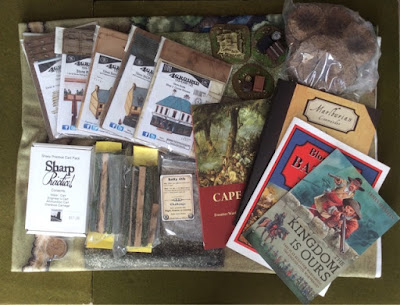 I suspect the MDF isn't a surprise, nor the expansion of my ever increasing library of rules.  The new Cigar Box Battle mat is Europe 2 which I hope to be able to lay alongside my existing one for larger games at home (my table is 6x6) or at the club - of course that does mean more terrain...

I managed to catch up with quite a few old friends and met up with the usual suspects at the bloggers' meet up.  There were some nice looking games on display (but others have plenty of excellent photos of those so I decided not to compete!).

The show itself was pretty much as before which is big but with a lot of compromises.  As always the size meant that there were things I missed and is pretty tiring to walk around but it also means I'm likely to meet up with folks who wouldn't travel to something smaller.
Posted by Whisperin Al at 8:18 am