Wargames Weekend: Carson Smith and the Tomb of the Prophet

Our first game of day two was an adaptation of a Pulp scenario for the Too Fat Lardies' Through the Mud & the Blood. Lenin made a few alterations to the original to reflect the figures he had available and so whilst I played to type taking the part of Doctor Zyklon and the forces of EFLUENT, the Evil Forces League for a United Empire of Nepotism and Terror; Lenin took the part of Carson Smith, the famous archeologist, and FLANGE the Forces of the League of Associated Nations for Government by Enlightenment. In this instance FLANGE was represented by Commander Tom Collins and the brave sailors from the USS Sangria. Their mission was to shadow Dr. Zyklonʼs expedition through the bush and establish just what it was he is seeking in Darkest Africa.

Of course as Dr. Zyklon, I knew exactly what I was seeking - an ancient stone of power revealed in the ancient scripts that I had recently ʻacquiredʼ from the Moscow Imperial Institute in the last days of 1917.

Only having vague guidance from the ancient scripts I first ventured into a nearby native village to see if I could extract any help from the locals. 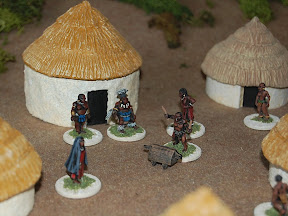 Meanwhile Carson Smith tried to locate the tomb before us. As we surrounded the village Sturm-Leutnant Anatolya and his men spotted a group from the Sangria. One of the advantages of playing the baddies is the ability to shoot first and ask questions (using the appropriate tools) later. So it was first blood to EFLUENT.

Dr. Zyklon and Sturm-Major Werner von Blott quickly established the location of the tomb but with more sailors from the Sangria coming into view a more defensive strategy seemed prudent. Of course I ordered Sturm-Leiter Bulgarov and his men to secure our flank. Unfortunately he ran into yet more of the Sangria crew and another firefight ensued in the jungle. 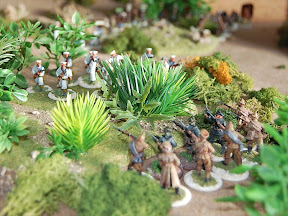 Whilst we were dealing with the US sailors, Carson Smith was taking his native allies to locate the tomb. 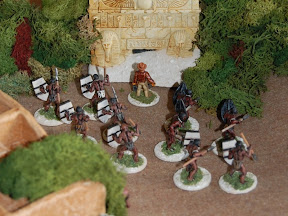 Taking care of the opposition took a little while and that gave Dr. Smith the chance to excavate the tomb and decypher the inscriptions. Of course having dealt with most of the opposition I had one of my teams keep him under observation and once he had entered the tomb and retrieved the stone we moved in and surrounded him. Dr. Smith had little choice but to hand over the artifact but swore revenge!