After playing yet another enjoyable game of Commands & Colo(u)rs: Ancients with Lenin during our last wargame weekend, I decided it was time to upgrade the weakest part of the game - the board. Unfortunately, GMT Games decided to include their usual thin card board with the original game and it does let it down a bit - not least by not laying flat.

Fortunately both Expansions 2 and 3 both contain the thicker board and so you do have some options in this regard. I did consider getting Expansion 3, which at £15 is the cheaper of the two, on its own but as the scenarios in it need the blocks from Expansion 2 it seemed a bit of a false economy; however, Expansion 3 does contain the epic rules and four epic scenarios which needs two board put together. Another dilemma.

In the end I decided to throw caution to the winds and bought both. Possibly a little extravagant but it does give me the better board I wanted and the option to play epic games, with up to 8 players, as well as all the new scenarios which can be found in both sets.

Expansion 2, Rome vs the Barbarians, has the new thicker board, around 330 new blocks, some additional terrain tiles, a couple of quick reference sheets and a rule book with 23 new scenarios including several with Spartacus and also a couple in Britain.

I have to say I don't relish having to apply the stickers to the blocks, one to each side, and decided to start on the smalle number of blocks in Expansion 3 first.

As with all the Expansions you need a copy of the original game to play as you don't get the dice, cards or sufficient terrain tiles in these ones in order to play the scenarios.

Expansion 3, Roman Civil Wars, has somewhat less in it than number 2 which probably shouldn't be a surprise as it is half the price. It still comes in the same sized and very good quality box though.

This one has the new thicker board, an additional 120 or so blocks, 19 scenarios for the traditional game, the epic rules and four epic scenarios along with another two quick reference sheets.

The epic rules allow you to place two board together (they have one side as the traditional board and one designed to marry up with another board to make a new wider, 26 x 9 hex layout needed). This allows you to play with up to 8 players, three field commanderS (left, centre and right) and an army commander per side. The rules are the same as the original game with the exception that the army commander can select three cards and distribute them to the field commanders to use. In addition, some of the cards are designated as army cards and so can only be played by the army commander. You don't need 8 players and could play with just two if you wanted though.

I'm really looking forward to getting an epic game arranged but, in the meantime, the new board and scenarios will make a big difference. 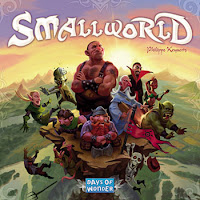 Whilst I was ordering the C&C expansions I decided to pick up a copy of the new Days of Wonder game, Small World. This is their version of the game Vinci but with slightly simpler rules and a fantasy theme.

Scott Nicholson has done one of his excellent reviews on Board Games with Scott and it was this which persuaded me that Small World would be worth getting. The game is essentially a land grab but with some difficult decisions to be made as to which race to take (each has their own strengths) and with special powers which change each game. You also need to decide when to put a race into decline and move onto a new one. Scott has a very through run through of the game play if you would like more detail.

We've only had one game so far but it was a lot of fun.
Posted by Whisperin Al at 3:05 pm

Email ThisBlogThis!Share to TwitterShare to FacebookShare to Pinterest
Labels: boardgame, commands and colors