On Sunday we started with another Nuts! based game. This time moving to a slightly earlier period - the Irish War of Independence. Now I know this is a controversial period for some but the figures from Musketeer were too attractive to ignore and I found the background reading fascinating. Anyway, this scenario was based on the Kilmichael Ambush where 18 men of the Auxiliary Division of the Royal Irish Constabulary were ambushed by the Flying Column of the West (Third) Cork Brigade of the IRA led by Tom Barry.

Since the IRA were supposed to have 36 men in reality I scaled them down a little to make the game a little more playable. Even so the ambush went pretty historically with Tom Barry waving down the front tender and then throwing a Mills bomb into the cab. 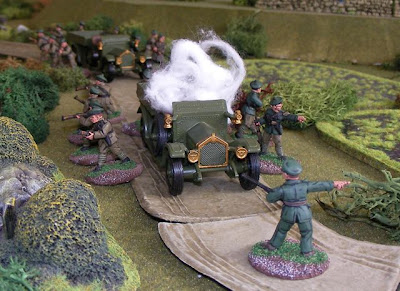 After that the Auxiliaries were caught between the first and second sections in a brutal crossfire. However, a courageous charge by some of the men from the rear tender did play havoc with the first section and, in the end, more Auxiliaries escaped than did historically and the IRA suffered several more casualties.

The Crossley tenders are converted from die-casts.

After the IWI game we decided to try something a little different and Lenin pulled out his West End Games 25mm Star Wars figures, of which he has many! But are sadly no longer available, except through eBay and the like.

Using the Star Wars Miniature Battles rules we played a small scenario with a couple of squads per side. As usual I took the mantle of the forces of law and order and Lenin played the Rebels (I don't really have a Rebel haircut!). 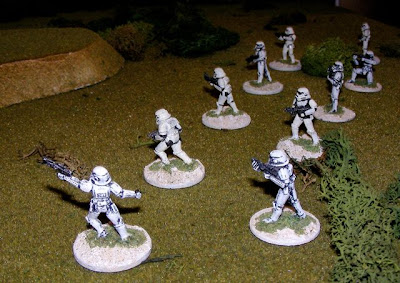 Lenin made excellent use of the available cover and my stormtroopers ended up getting cut down rather quickly. Which upset Lenin no end, as the other figures he had painted especially for the game didn't even make it to the table!

It's a while since I've played the SWMB rules and, whilst I think the WEG Star Wars RPG rules (1st Edition) are excellent, and the miniatures rules tie in with those, for some reason the SWMB rules are just a little too fiddly. As a result we may be looking for an alternative set for future games - especially as Lenin has sold me quite a few of the Wizards of the Coast CMG figures which I can use for Hoth.
Posted by Whisperin Al at 10:04 am