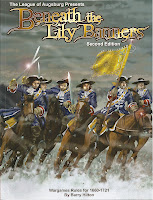 As our next War of Spanish Succession game I decided to try out Beneath the Lily Banners (2nd ed).  Whilst we kept the same terrain as the previous Maurice game, we decided on more of a straight battle - so we evened up the forces and redeployed them.
Lenin retained his deployment from the previous game but I laid my troops out in a more traditional line (since there wasn't an objective to defend).  Once again infantry in the centre and cavalry/dragoons to the flanks with Lenin's artillery on the hill and mine dispersed between the infantry.

As with Maurice the game began slowly as we both got the hang of the rule mechanics.

Then Lenin decided to throw the dragoons on his right forward to try to outflank me.  Then he began to advance his infantry in the centre whilst we exchanged artillery fire.

I turned my dragoons to face the flanking threat and advanced my infantry to meet Lenin's.  The centre rapidly descended into a musketry battle with neither of us wanting to move into melee without a clear advantage.  With the British having the platoon firing advantage this wasn't exactly a plan designed to favour my side unfortunately!

Despite slowly taking casualties, our infantry morale held and we both decided to call a halt to the game for a rules post mortem.

We weren't quite sure what to make of the rules as we liked some elements of them but had a real concern that something wasn't right.  Obviously the order mechanism provides some interesting challenges (especially if your dice rolling is as unpredictable as mine) and some of the period elements made the game interesting (platoon vs rank firing) and it was clear that they would suit a multiplayer game more easily than Maurice.  But our overall conclusion was that I was doing something wrong with the moral rules as with the casualties being suffered from musketry we would have expected it to be easier for the units to fail their morale.  I fully intend to persevere with the rules and I am planning to set up another game and have another run through the rules to work out what went awry prior to our next proper encounter.
Posted by Whisperin Al at 9:36 am